What follows is an edited transcript of my original thesis presentation titled “Person Thing #1-3: Explorations of a Cyborg” from May 2019.

For my thesis, I’ve created art pieces exploring the elusive gray area in between “thing” and “person”. More specifically, I’m playing with the visual languages established in western culture used to depict people that are racialized and gendered as East Asian women or “the yellow woman”.

Media informs our perceptions of others and ourselves. It is representative of a society’s ideals while also imposing ideals onto it. This is a still from a cartoon I watched as a kid called My Life as a Teenage Robot. At the time, I always thought the main character was also Asian American despite her generally being depicted as a ‘raceless’ robot. I related to this character so much because like me, she struggled to adapt to the social norms of suburban white culture.

On the other side, in science fictions movies like Ex Machina, Asian women are presented as servile objects, simultaneously providing sexual titillation and othering body horror to viewers. There is an interesting tension there that has been floating around my mind since that I’ve been trying to decode.

I may have always been thinking about my own experiences as a marginalized person in some form but it wasnt until i read Ornamentalism by Anne Anlin Cheng where i saw a framework clearly laid out for the underlying system in how East Asian women are racialized and gendered.

This is a long and enduring tradition and it most interestingly, it suggests that

Asiatic femininity in the Western racial imagination does not need to pass through the biological or the natural in order to acquire its most palpable, fully sensorial, supple, and vibrant presence (Cheng).

Although we are familiar with these concepts and may hear it discussed as “’Oriental female objectification’… we barely know how to process the political, racial, and ontic complications of confronting a human figure that emerges as and through ornament” (Cheng).

A cyborg or a cybernetic organism is a being with both organic and mechanical body parts. It’s often evoked in science fiction to talk about themes such as human vs. machine or human vs. object. Cheng uses the metaphor of a cyborg to describe the how East Asian women are racialized and gendered.

The dream of the yellow woman subsumes a dream about the inorganic. She is an, if not the, original cyborg (Cheng).

For the aesthetics of my project, I decided to focus on cyborg imagery because of my interest in science fiction, my own background in computer science, and the rising influence of techno-orientalism.

After Ornamentalism’s release, I came across this tweet by curator, writer, and friend Danie Wu.

So with my background studying computer science, I thought “Who better to create cyborgs than a cyborg herself?” While designing and building this project, I positioned myself as a cyborg creating cyborgs.

Person Thing #1-3 is a series of experiments where I create representations of east asian women (or myself) in artificial objects and examine my relationship with my creations.

Can I better understand the blurry line between person and thing and the visual language that drives it?

Will I see my creations as another object? Or as a clone of myself? A new separate being?

Person Thing is a series of three pieces.

I designed these pieces around experimenting with different forms of representation. From physical to virtual to sound and text based. I originally proposed three pieces and was told at midterms that it was “ambitious” and decided to go through with it. Right now, I’ve only completed 2 of them. So, I will talk more about these first two in this presentation.

Why a series and in different mediums? I wanted to see if I can rework similar themes/ideas and portray them in different mediums. These projects also reflect my interests and ideas about art. I’ve always been caught between my interests in mixed reality and hand crafting physical objects. Usually, I want my work to be accessible to anyone with at least an internet connection and a common mobile device. So, I designed this series to have a project that can be downloaded and experienced at any location by a large number of people.

Person Thing #1 is a garment constructed of acrylic and printed circuit boards or PCBs with speakers and colored leds. The speakers are fed audio through aux cord inputs connected to mobile devices playing different videos. The audio quality is intentionally distorted with a lot of interference and feedback. I wanted to depict a synthetic skin that comes to life through media. The speakers’ audio blend together, conceptually imbuing the skin with media.

While designing the aesthetic of this piece, I was inspired by Alexander McQueen’s FW 1999 collection for Givenchy as well as the modular nature of 1960s Paco Rabanne dresses.

I chose hard materials because I wanted the garment to hold it’s form and show a figure’s silhouette even when not worn by a person.

There are 7 unique boards in the garment that drive its functionality. I designed the boards in Eagle and milled them on Othermill milling machines. I then soldered components on all of them using the solder paste and reflow method.

The clear acrylic was cut out with a lazercutter. After linking every piece with metal rings, I connected the circuits by hand soldering silicon wires across all the connections.

I then programmed the microcontroller controlling the neopixel leds to display the lighting pattern.

I’m still unsure about the display of the piece currently. The dress form used in the documentation video and photo is very solid and opaque, taking away from the synthetic skin concept. One idea I want to try in future installations is suspending the garment from the ceiling to create a ghostly feeling.

I see the time consuming and delicate physical work of making PCBs as handicraft despite the materials and process usually being associated with mass manufacturing.

Although I wasn’t necessarily thinking about this while planning this project, I’m now thinking more about the context of labor and how that impacts our perceived value of it. Since I constructed this project in America, many of my peers may view me and my labor as artisan while simultaneously also viewing manufacturing in China as cheap or unreliable, devaluing the labor of many similar aged also Chinese women assembling circuit boards in factories. Maybe my future work on PCB projects will be framed to blur the divide in our perceptions of “West” and “East”.

Person Thing #2 is an AR interactive sculpture. A ghostly human-scale 3D figure is placed on the ground in augmented reality. The ghost wanders around the area aimlessly but comes towards the viewer every so often. The ghost is made from media, a combination of 3D models of robot and anime figures readily downloadable from the internet.

I wanted to create a digital synthetic ghost with a haunting presence. I want the viewer to experience an eery feeling from being at an intimate distance from a breathing, human-sized figure that is also grotesque and inorganic.

For the aesthetics of this piece, I was inspired by depictions of feminine cyborgs by Hajime Sorayama and Lee Bul.

While designing this project, I started thinking about the idea of 3D models as readymades. I downloaded a bunch of idealized anime girl avatars available for free from Sketchfab made by other users around the world. I then combined them in Blender, a 3d modeling software, rigged them on Mixamo, and imported them into Unity, where I created the AR app using Google ARCore.

Now that I’m finished, I’m unsure of the impact of an immaterial avatar. Although, viewers have told me that they felt afraid when the figure was walking towards them. Due to the limitations of my 3d modeling and animation skills, the avatar is not as complex as I originally imagined. I also do not like how viewers have to download a separate stand alone app to experience the piece. I would like to eventually put this experience on the mobile browser using webAR. 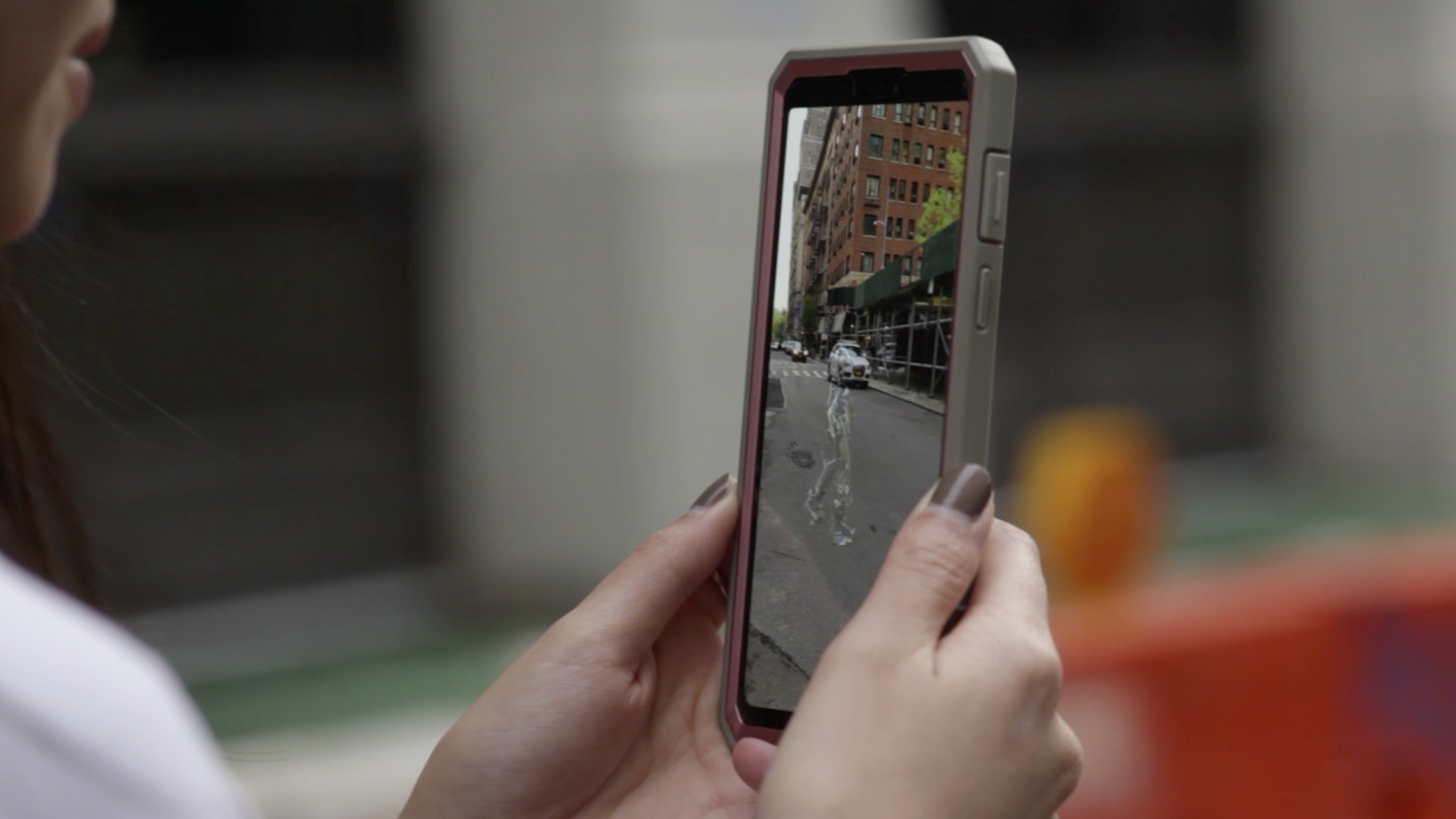 Looking back, I tried to pin down what I was actually making this whole time. Currently, I think that I am creating sculptures of bodies that reflect what is haunting me (in general my anxieties from living in this world).

I truly felt like a cyborg making cyborgs, combing myself with tools, machinery, computers, and networks to create these pieces. I see myself in this series not only because of the underlying theory but also because I constructed almost every piece myself. I learned the most during the research process of my thesis and hope to continue forward with the knowledge I have gained. Obviously, I have not arrived at a definitive answer, but I will continue to think about these concepts and push them forward in future works.