I wanted to use paper and metal wire to create a design inspired by a diamond ring. I used paper for the gem stone part and metal as the holder/jewelry part. Figuring out the process and design took me a long time and many tries. Basically, I learned that I hate working with paper and I’m really bad at soldering.

Originally, I thought that I could construct a paper diamond using origami. I printed out a diamond design onto paper and cut it into a square. 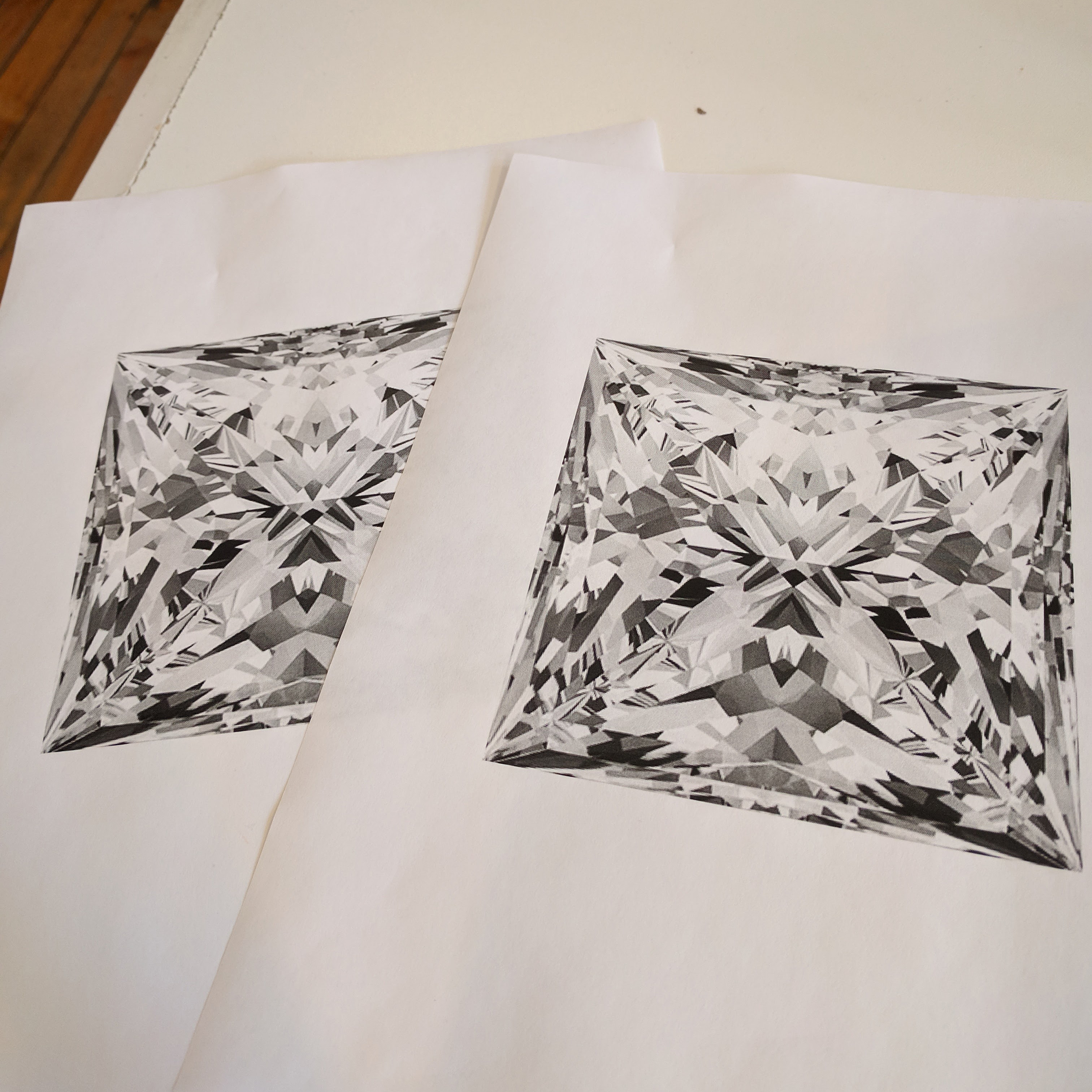 I then followed this really complex origami tutorial. The result was not what I wanted. I didn’t think it was worth practicing further since I didn’t think I would get skilled enough to make it at an even smaller size. 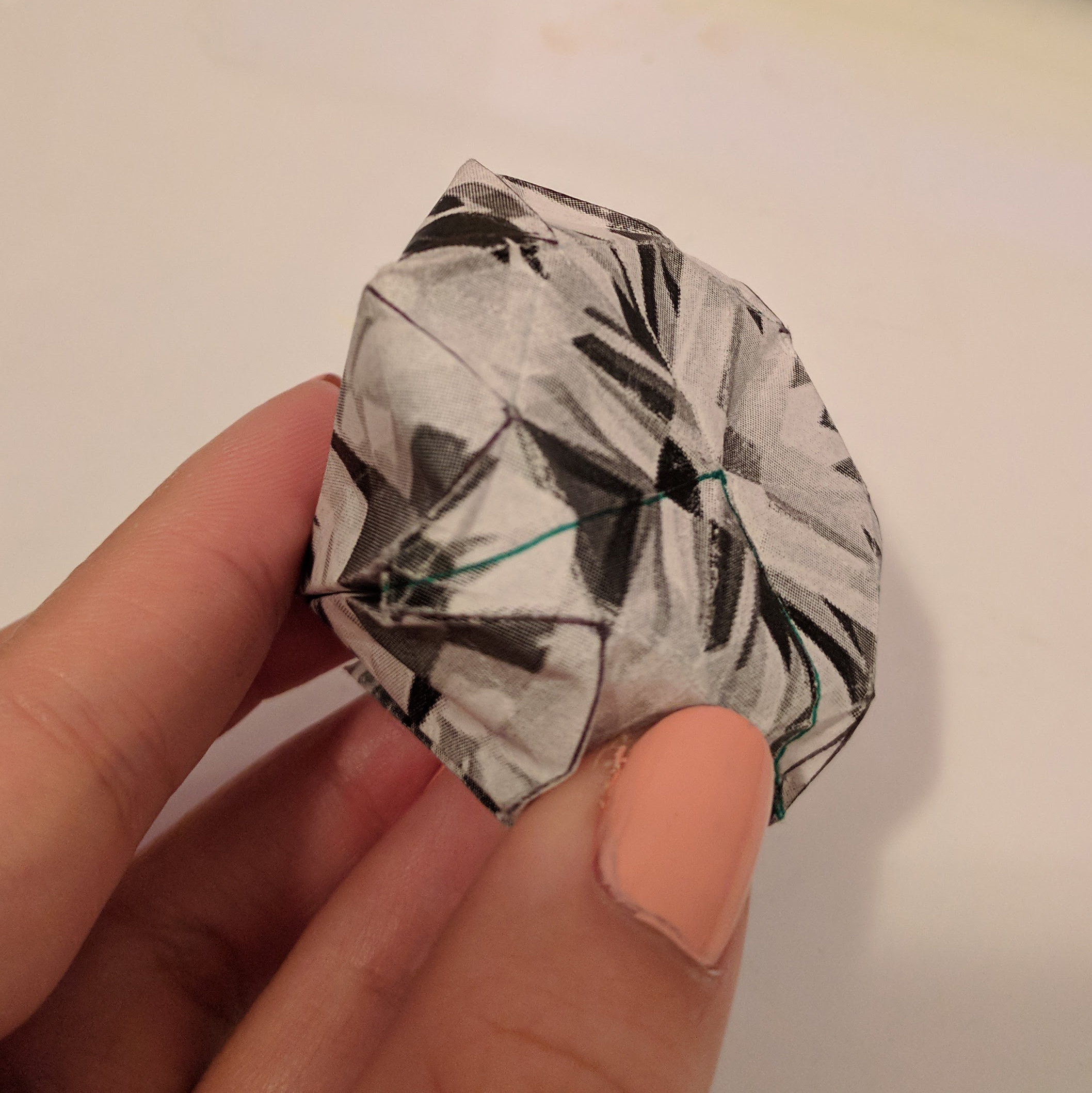 I decided to go simpler and glue tabs together. I downloaded a pattern from this blog and traced the outline on Illustrator to laser cut. I first tried with regular computer paper. I glued the edges with Elmer’s Multi Purpose Glue-All. I attempted to make a ring out of soldering wire and attached it through the bottom point of the diamond. 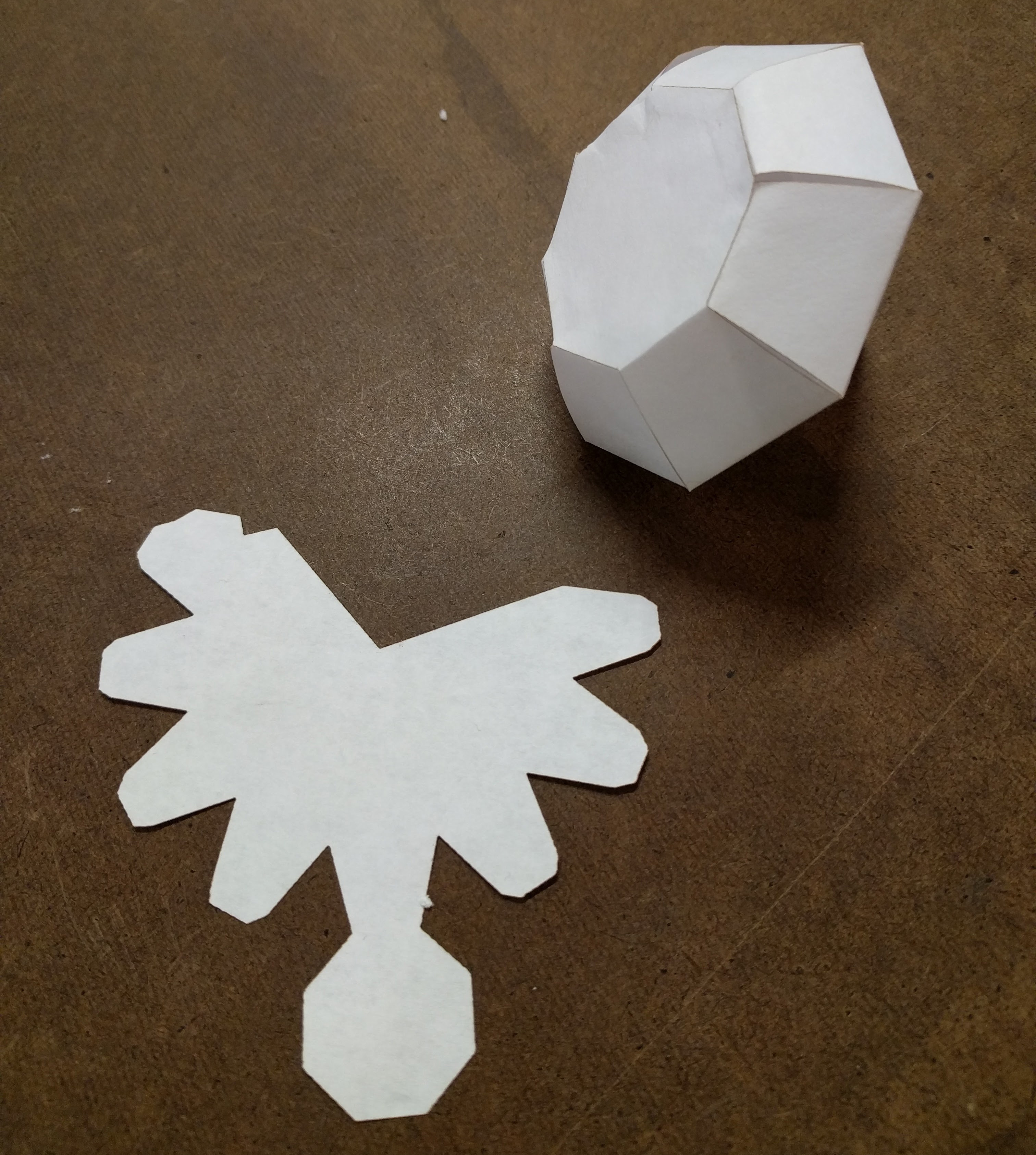 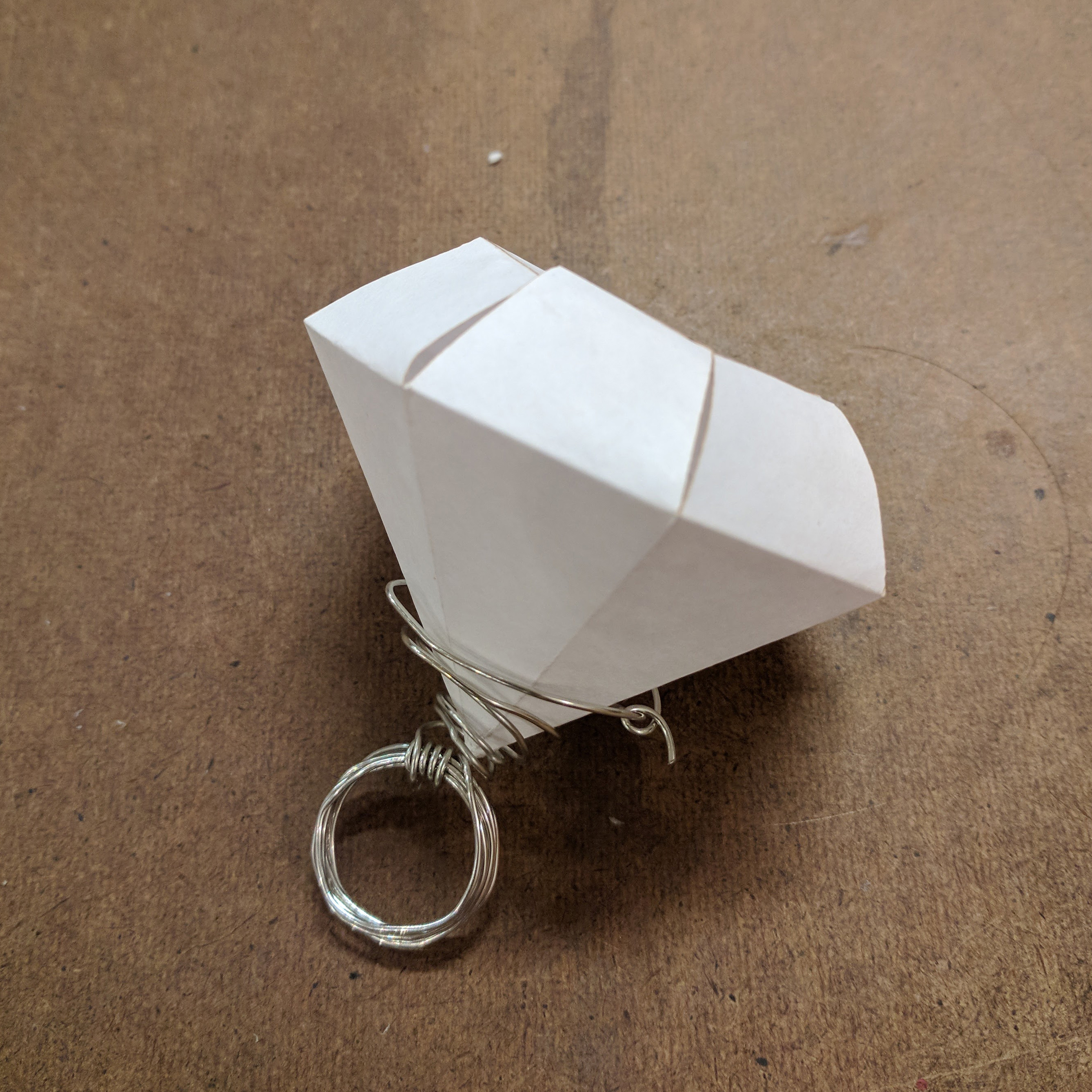 From this, I learned that computer paper was way too thin, soldering wire was too soft, and the size of the diamond was too large.

I then tried lasercutting the pattern out of a thin cardboard/mat board. This glued together really well. I tried making the ring portion out of copper wire with holders that gripped the top edges of the diamond (like a real diamond ring). Soldering this together with solder failed miserably. I couldn’t get the top holder sections, once connected, to fuse to the ring portion. 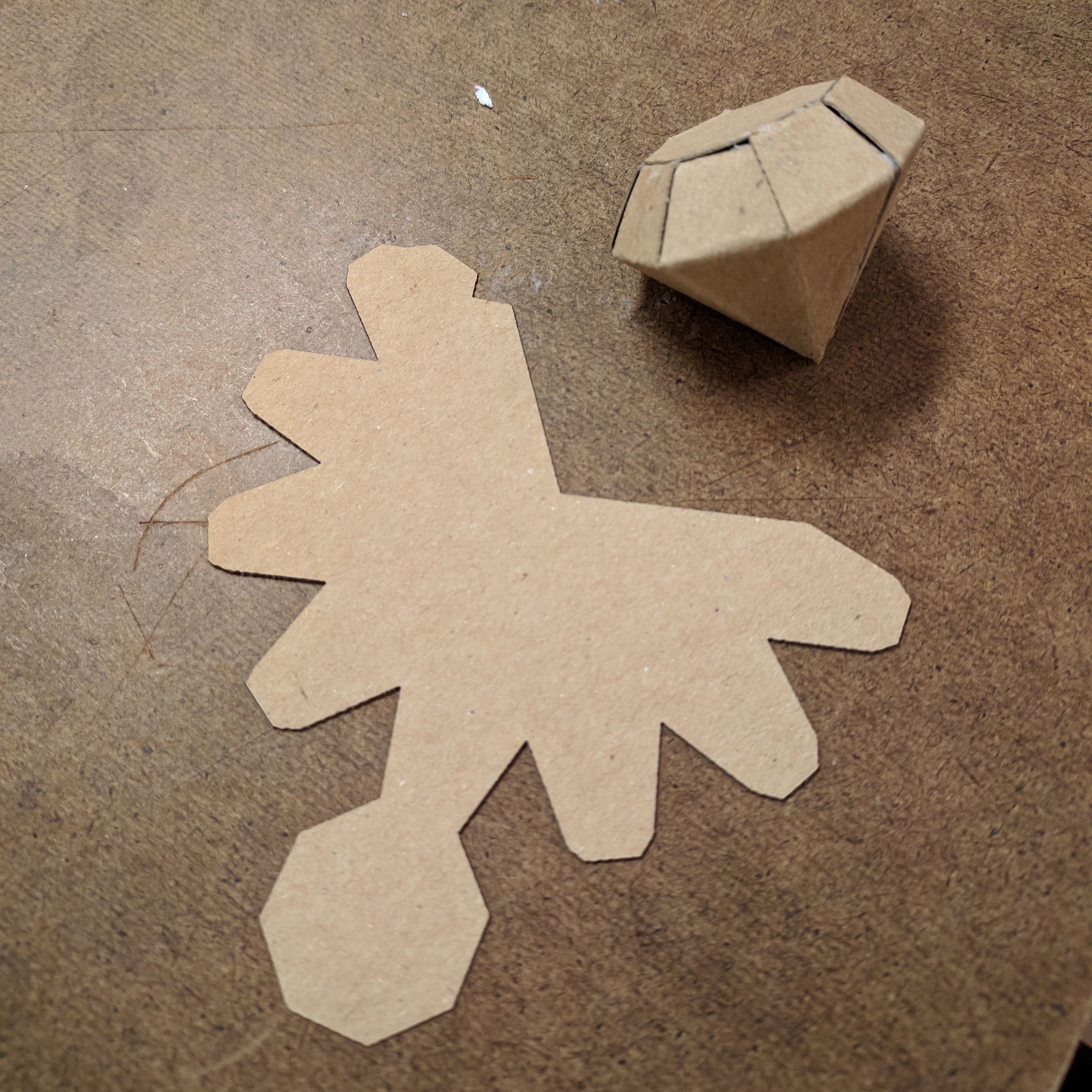 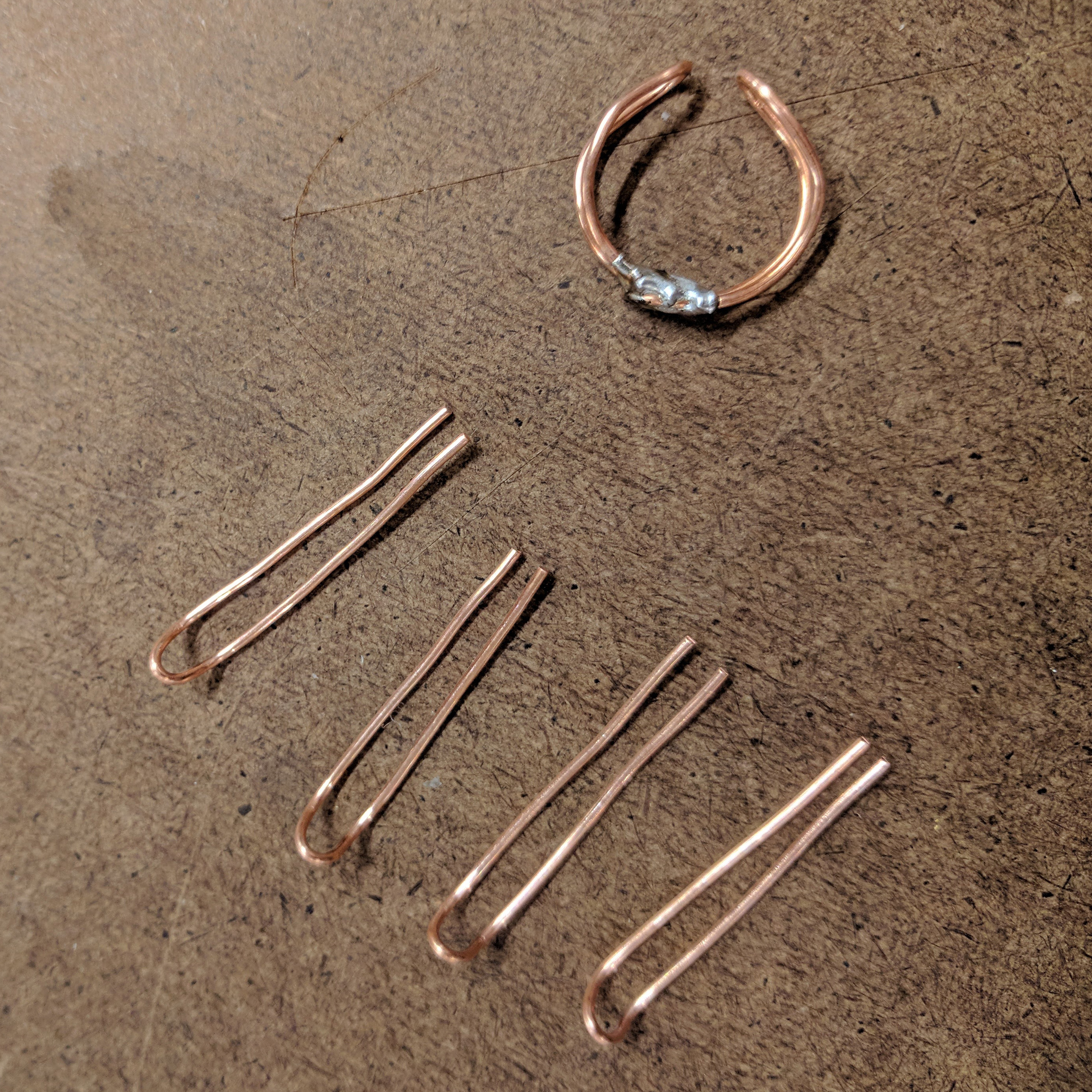 I then thought that I could just string the paper portion into hoop earrings. It would have the look of a jeweled ring but actually be slightly more functioning jewelry. I wanted to try using thick red paper I found. This held together well with the glue. 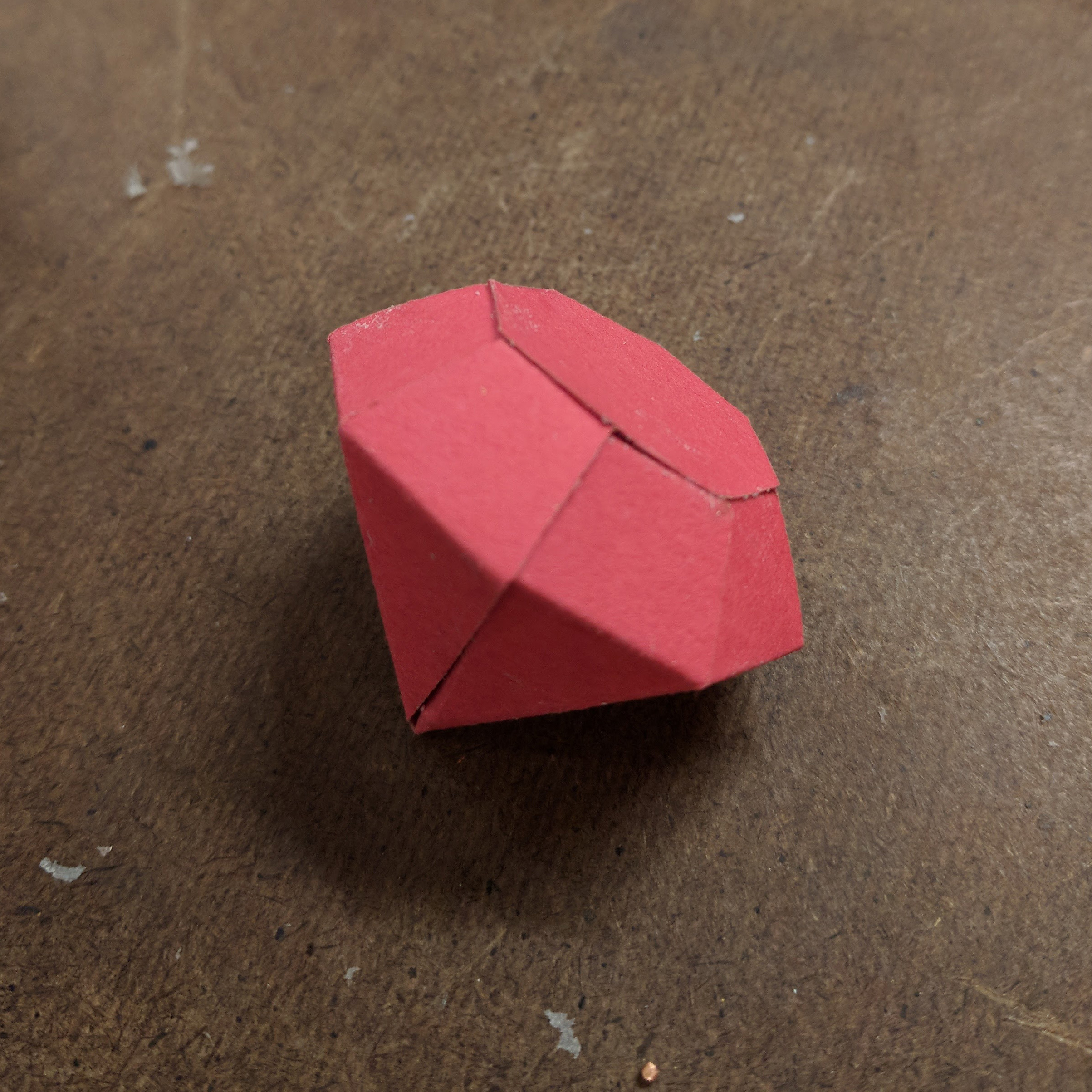 I added large holes to my laser cut pattern. I then tried assembling my prototypes. Final lasercut pattern: 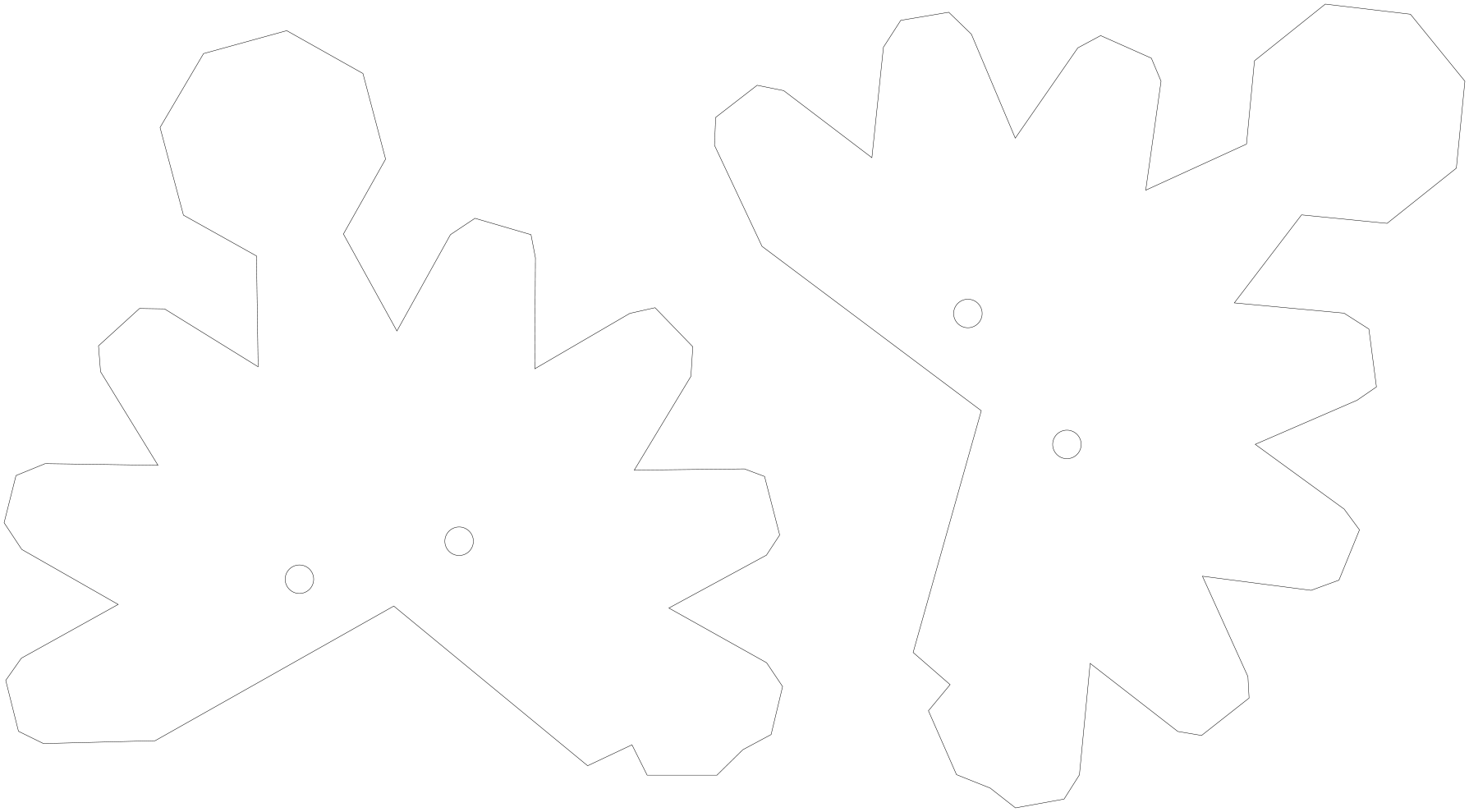 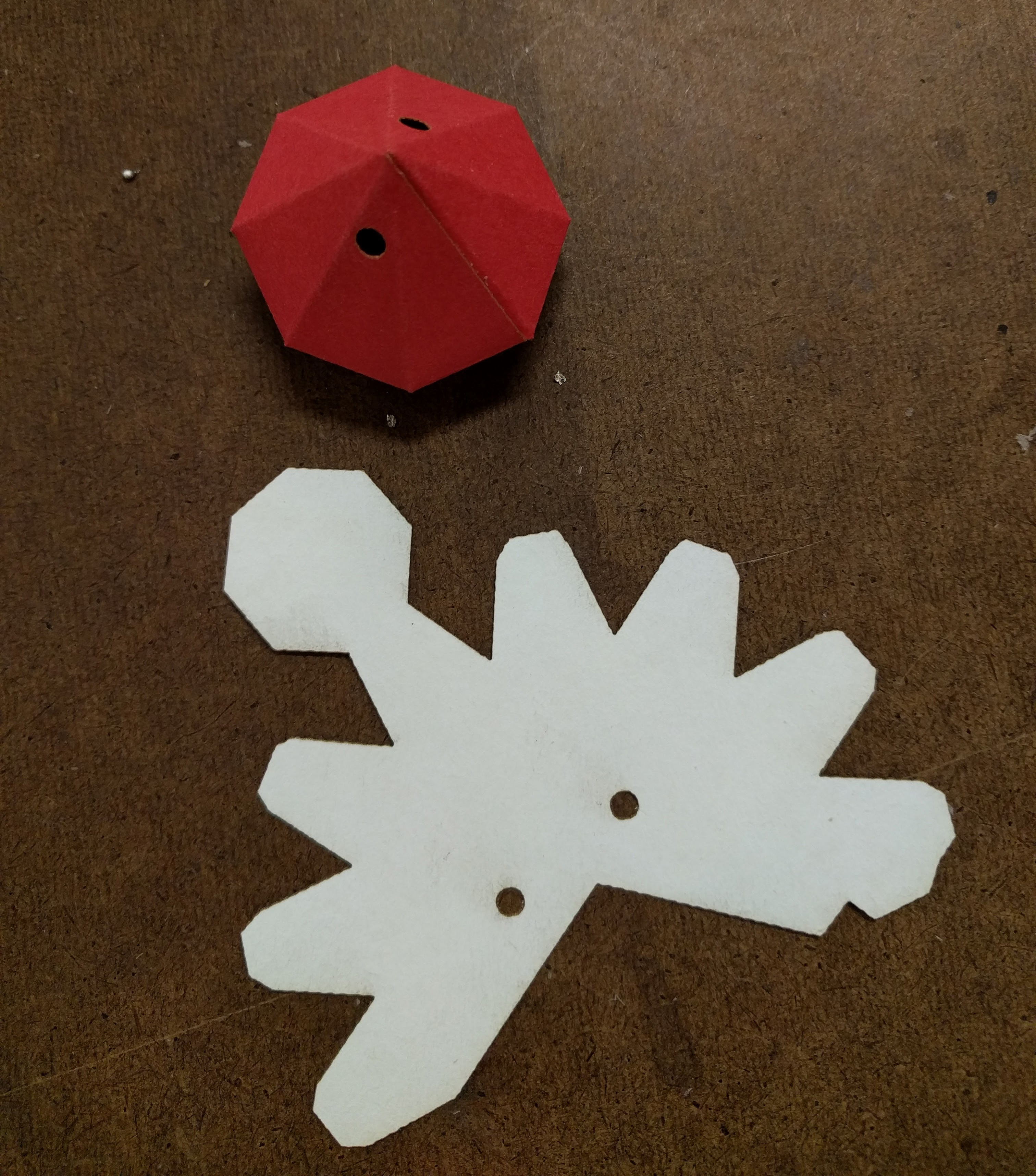 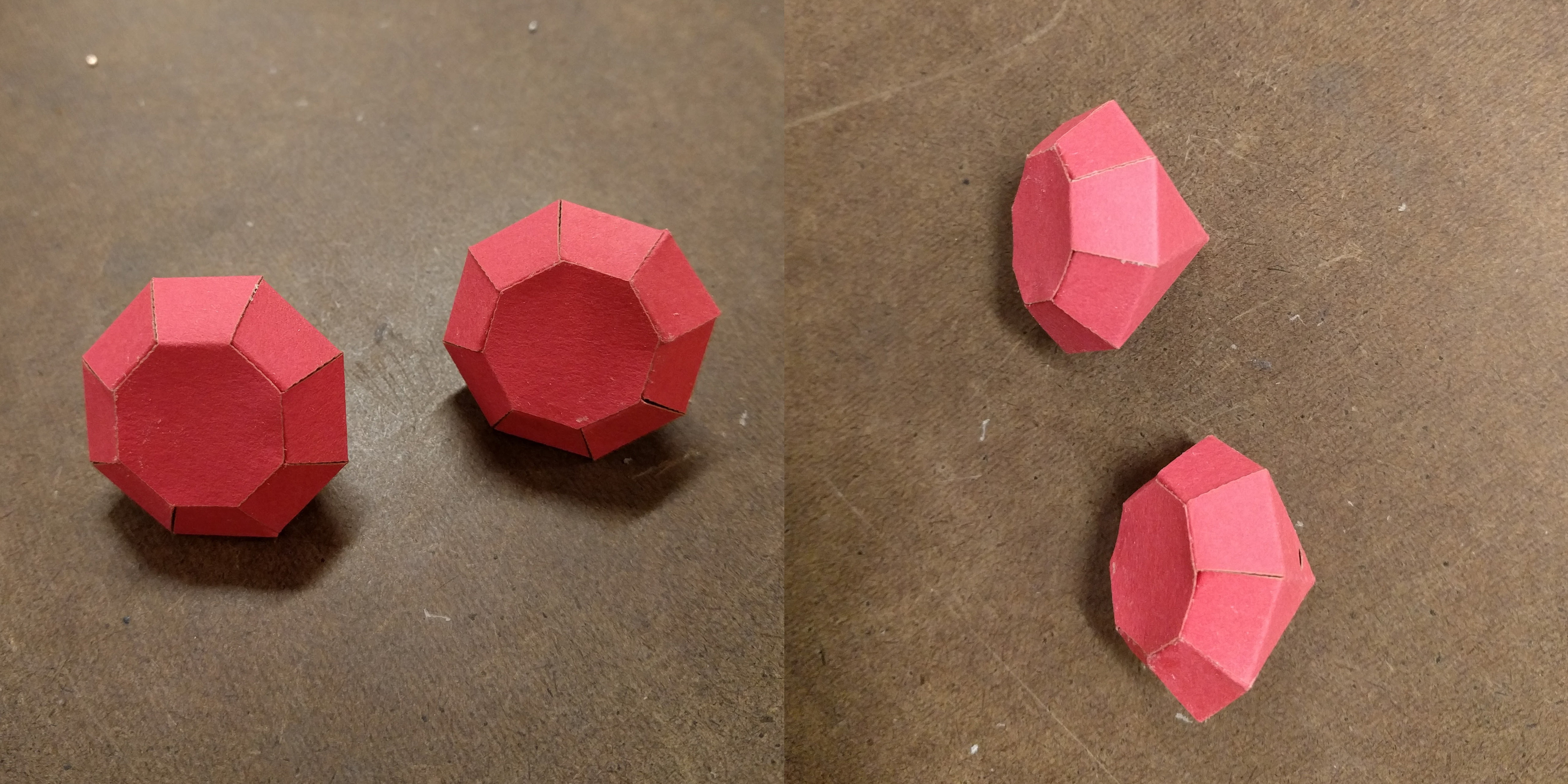 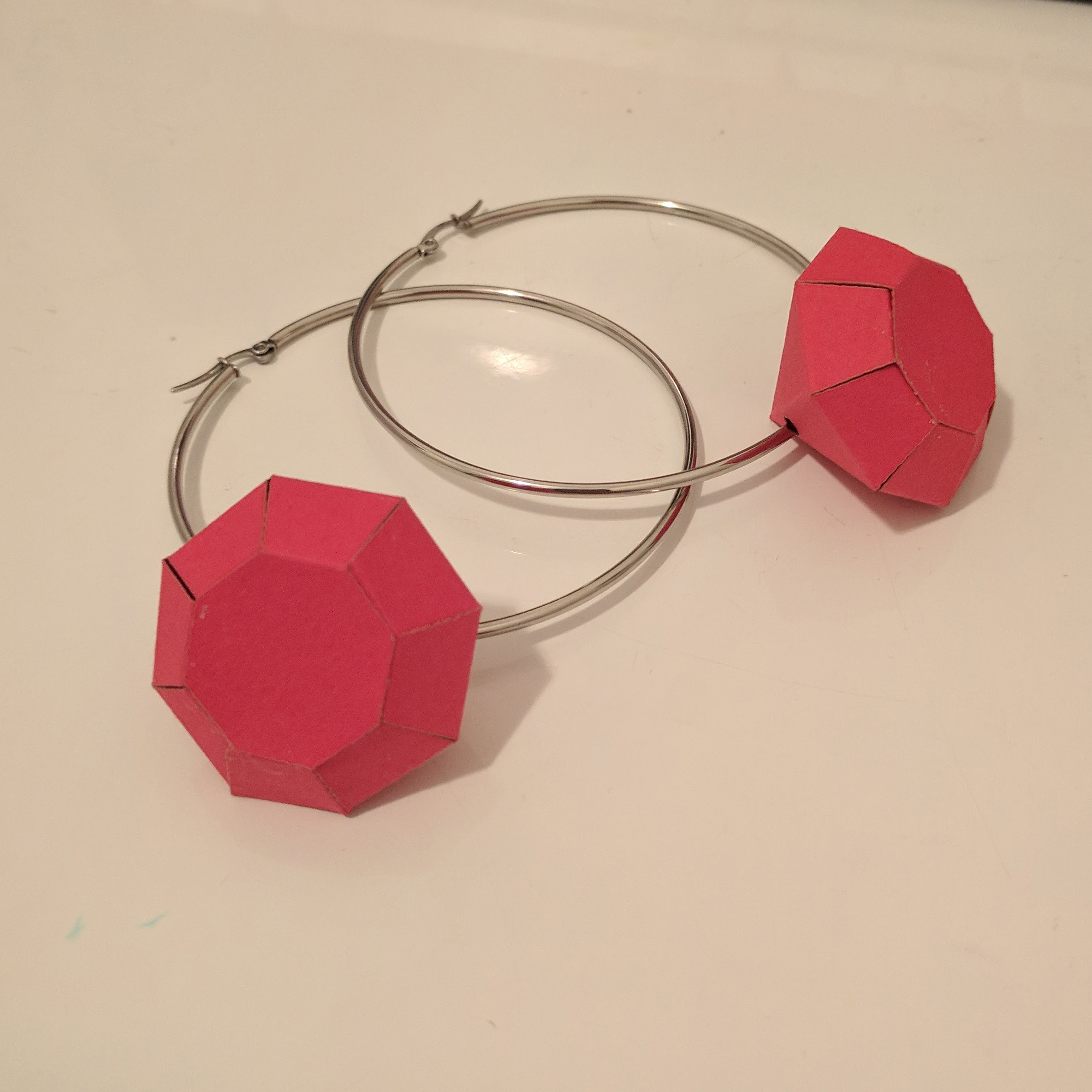 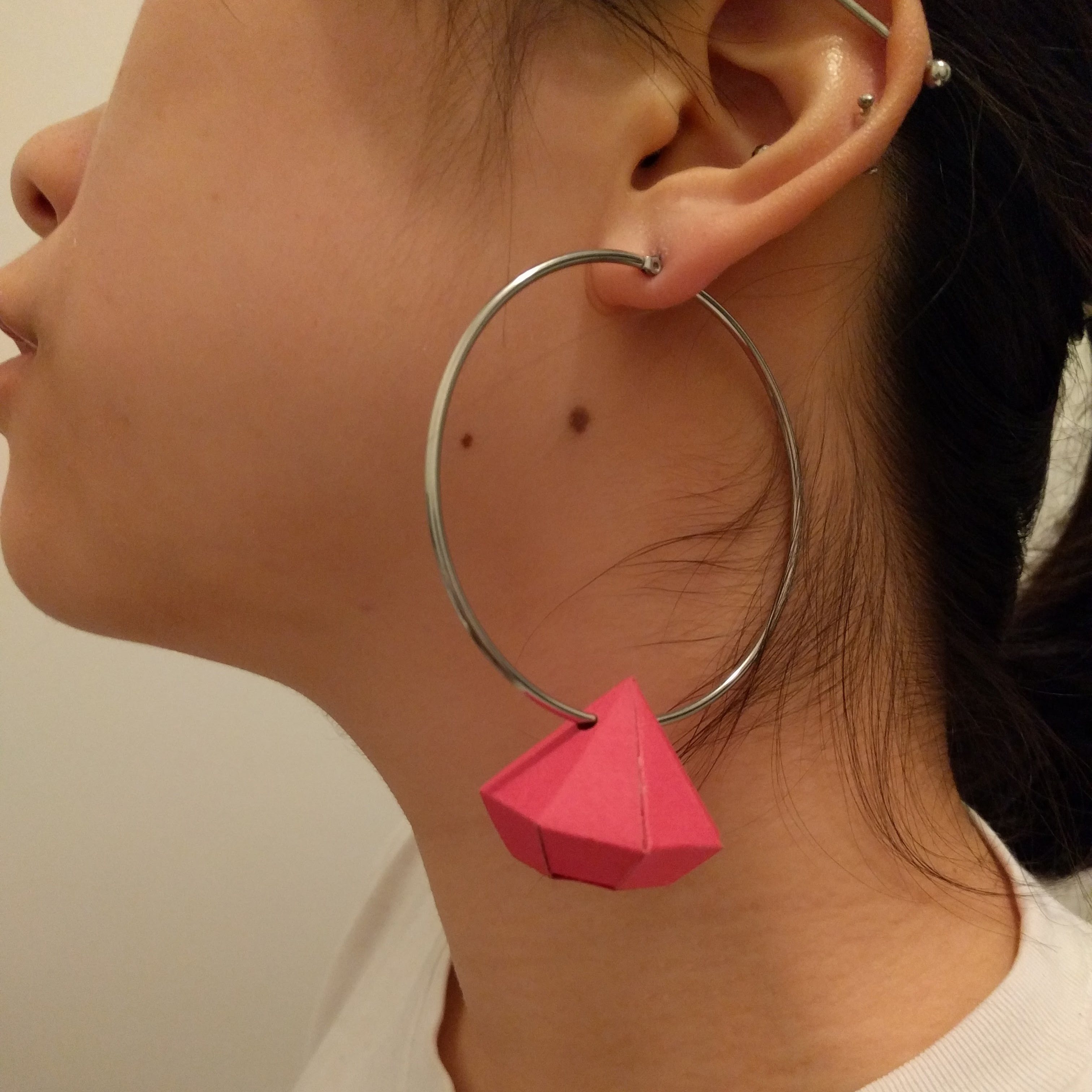 It looks okay. I would improve the design by using reflective/metallic paper, making even smaller paper diamonds, using smaller proportional hoop earrings, and figuring out a sealant that would preserve the fragile paper.

Note: I didn’t have time to fix the comments section on my blog this week. I’ll try to figure it out for next week.