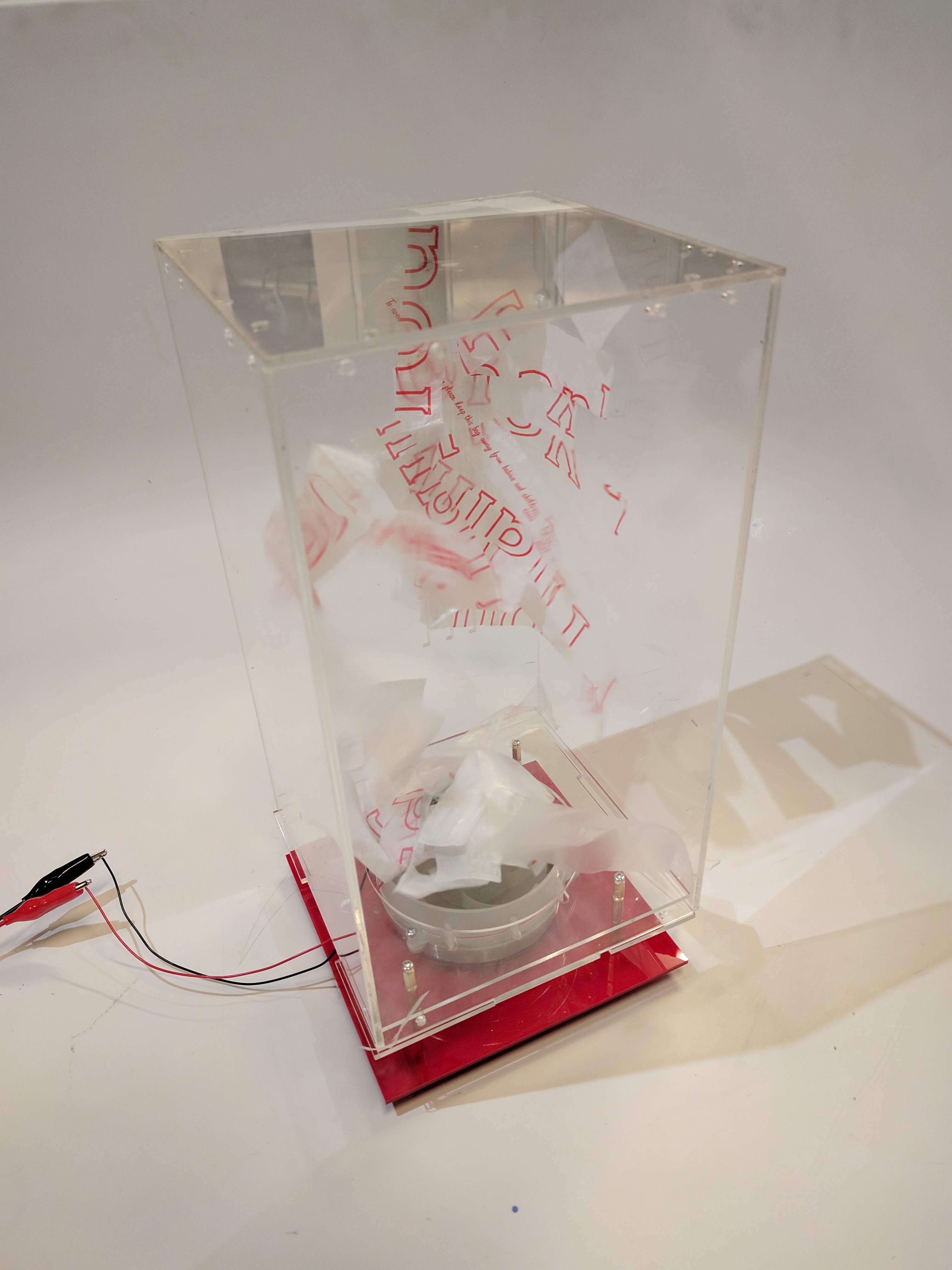 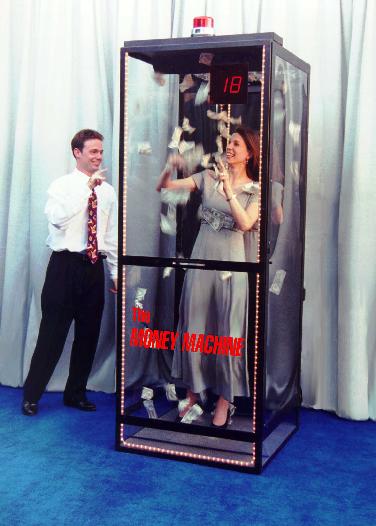 I remembered going inside of one of these money blowing boxes as a kid and trying to scoop up as much money as I could during the time frame. I wanted to create a smaller, table top version that could store my cash. When I need cash, I just need to pull a dollar through a slit.

The motor was repurposed from a hand vacuum from the junk shelf. It was really hard to remove it because the screws keeping the shell together stripped. I eventually had to pry it apart. 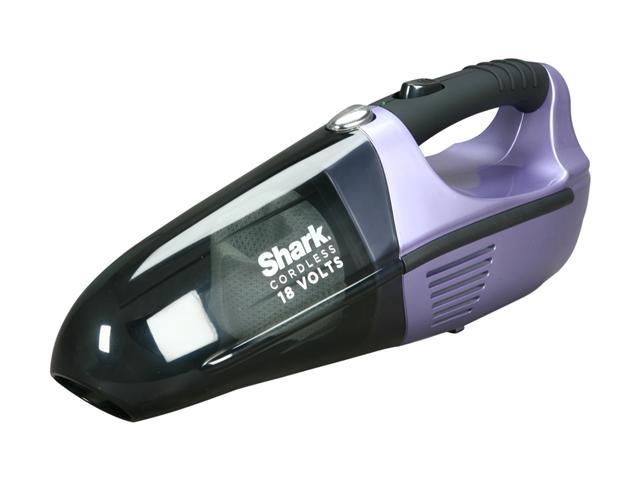 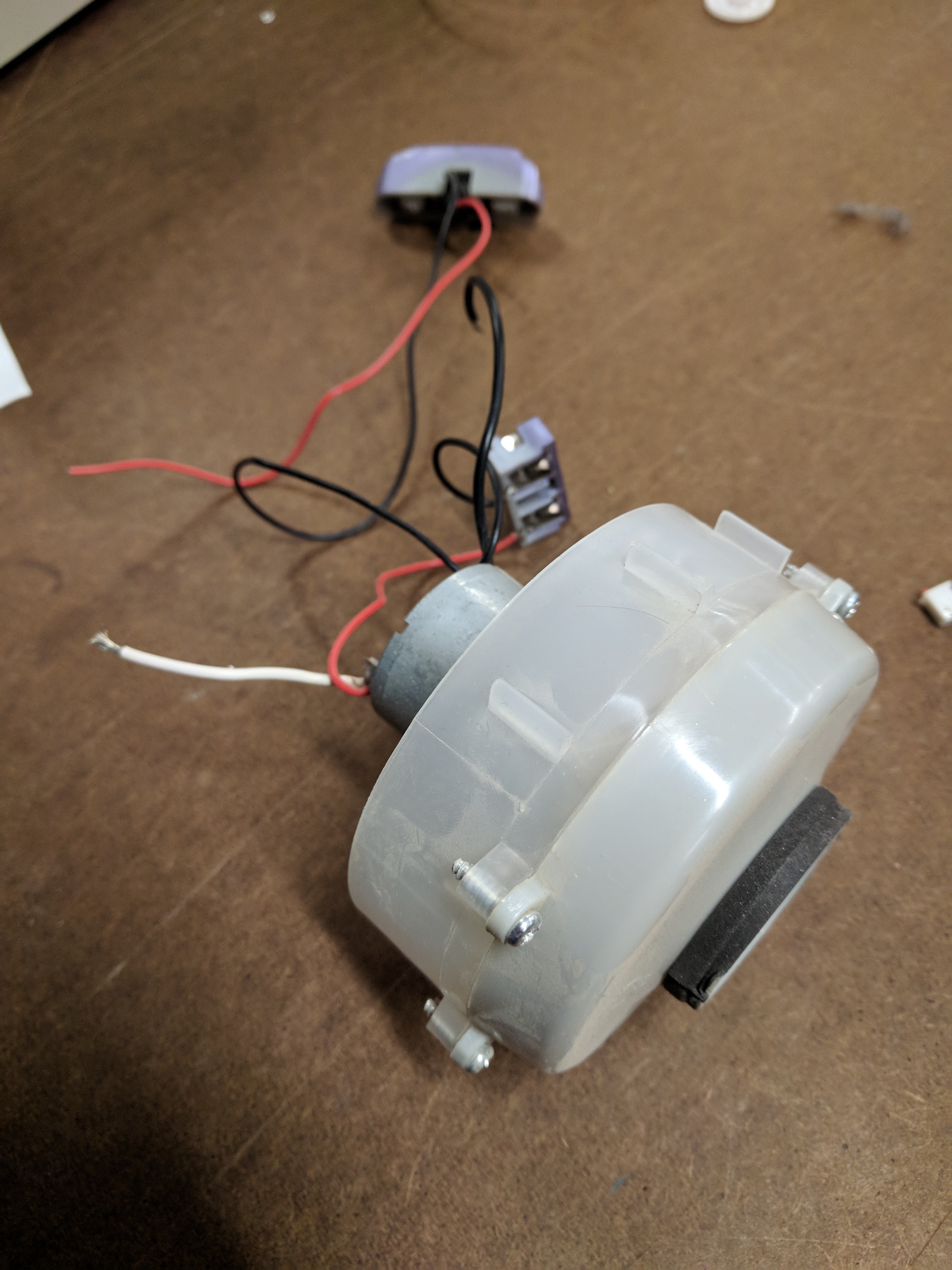 I tried to reverse the polarity of the motor so that it would blow air out rather than suck; however, reversing the leads didn’t change the direction of the air flow. I then decided to just use the ‘back’ side as the fan. So air is be drawn in through the former vacuum part (‘front’) and then blown out into the box.

I don’t know anything about airflow so I decided to test in a cardboard box. 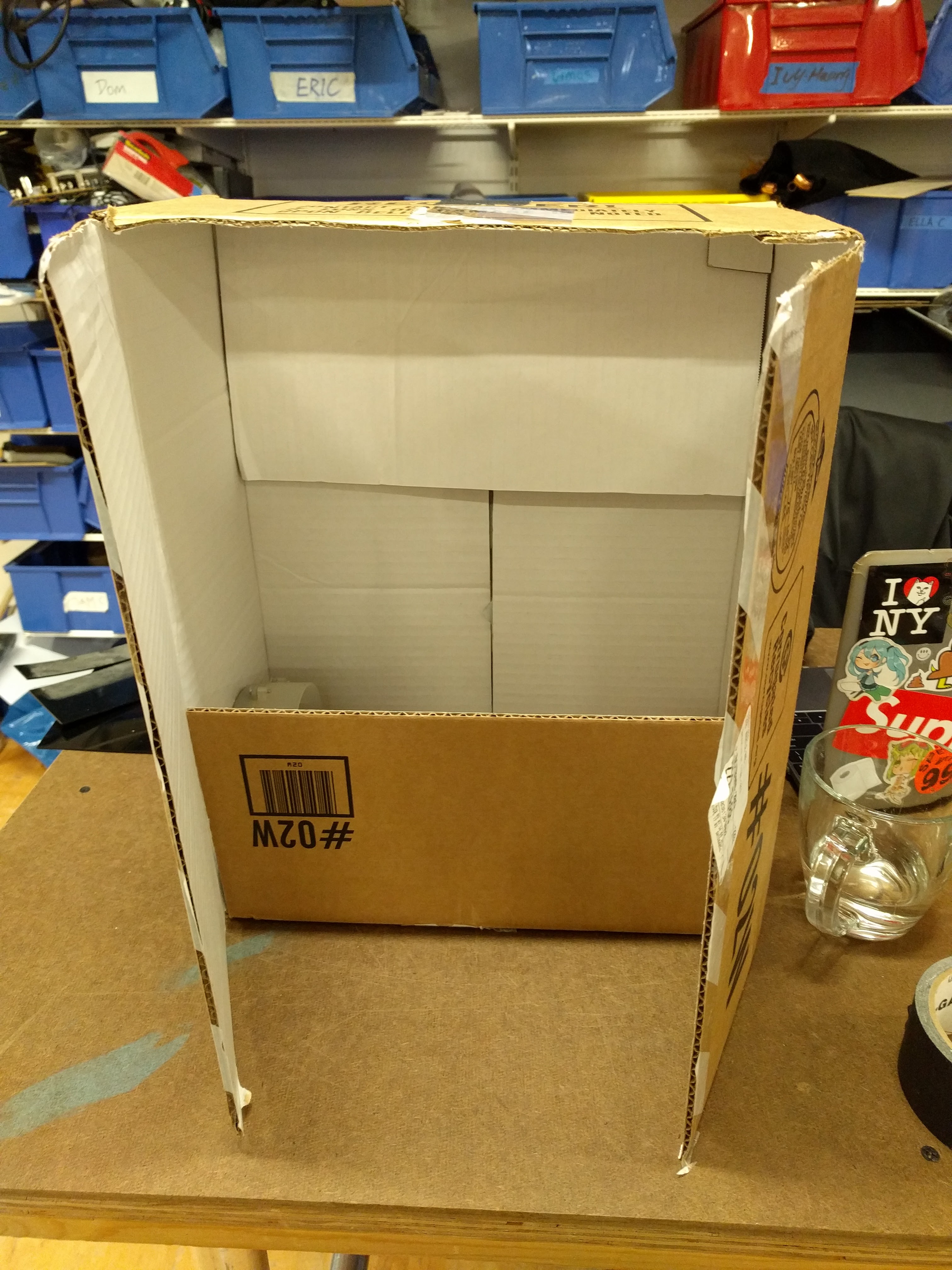 I soon realized that dollar bills were too heavy to be lifted and circulated by this motor. I then used strips of paper napkins. 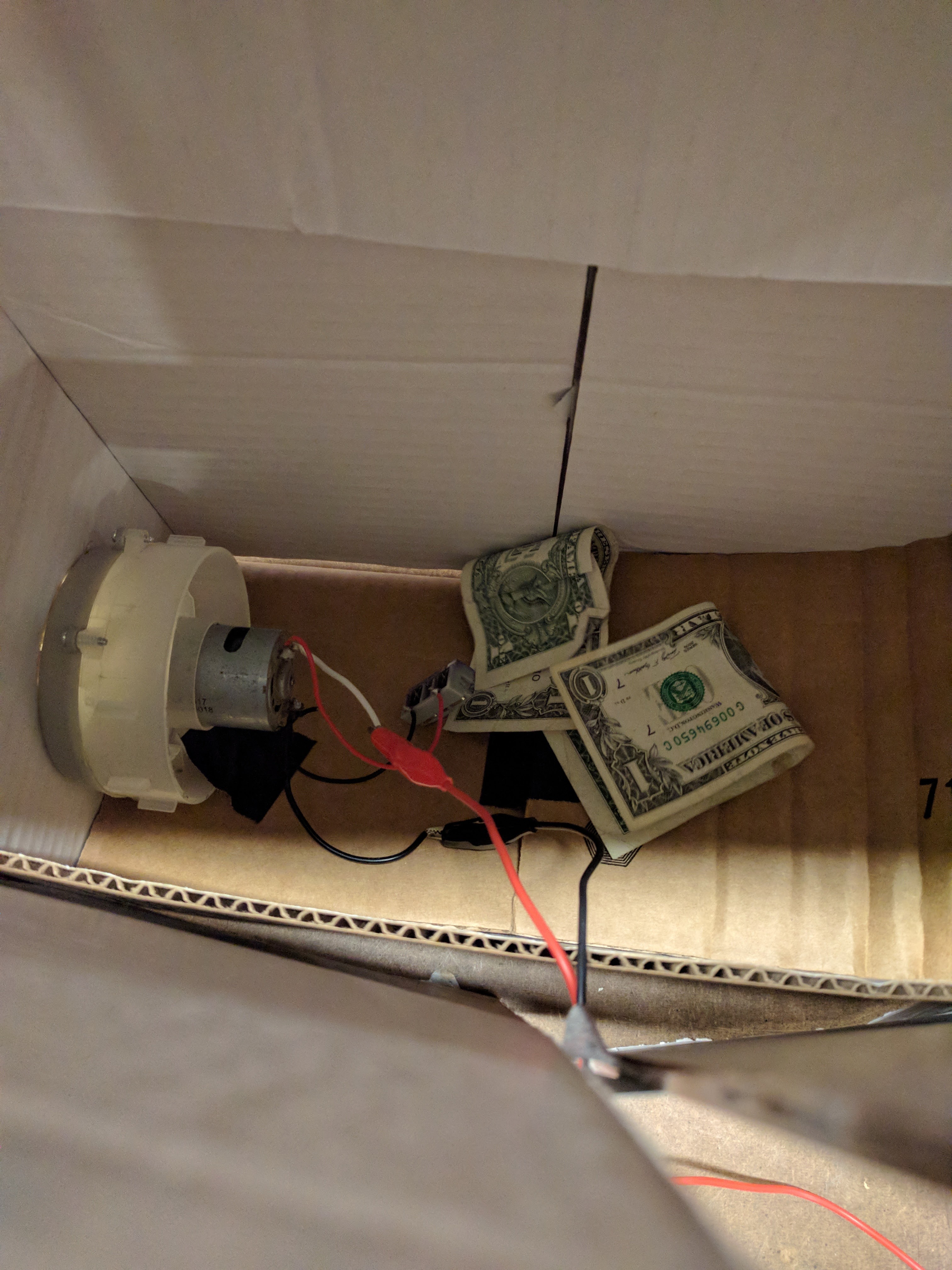 First I tested with a horizontal orientation with the fan on the side of the box. I made a curved piece of cardboard on the opposite side to redirect the air up. I learned that I needed ventilation to create an air flow. 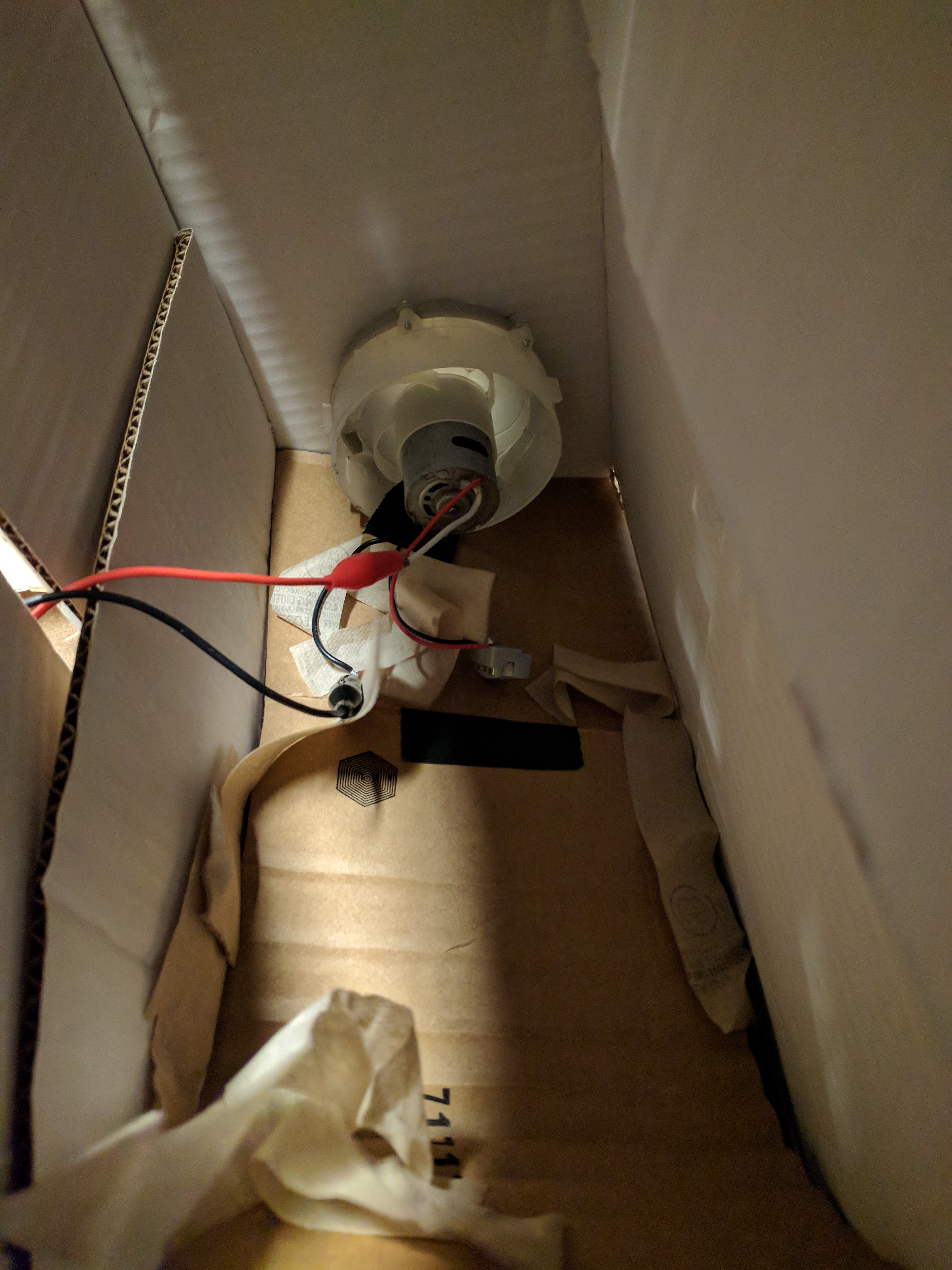 I then tried with the fan underneath, blowing up. This worked a lot better to circulate the air. However, I felt that the box was too large for the strength of the fan so I separated the box into a smaller section and tested within that. 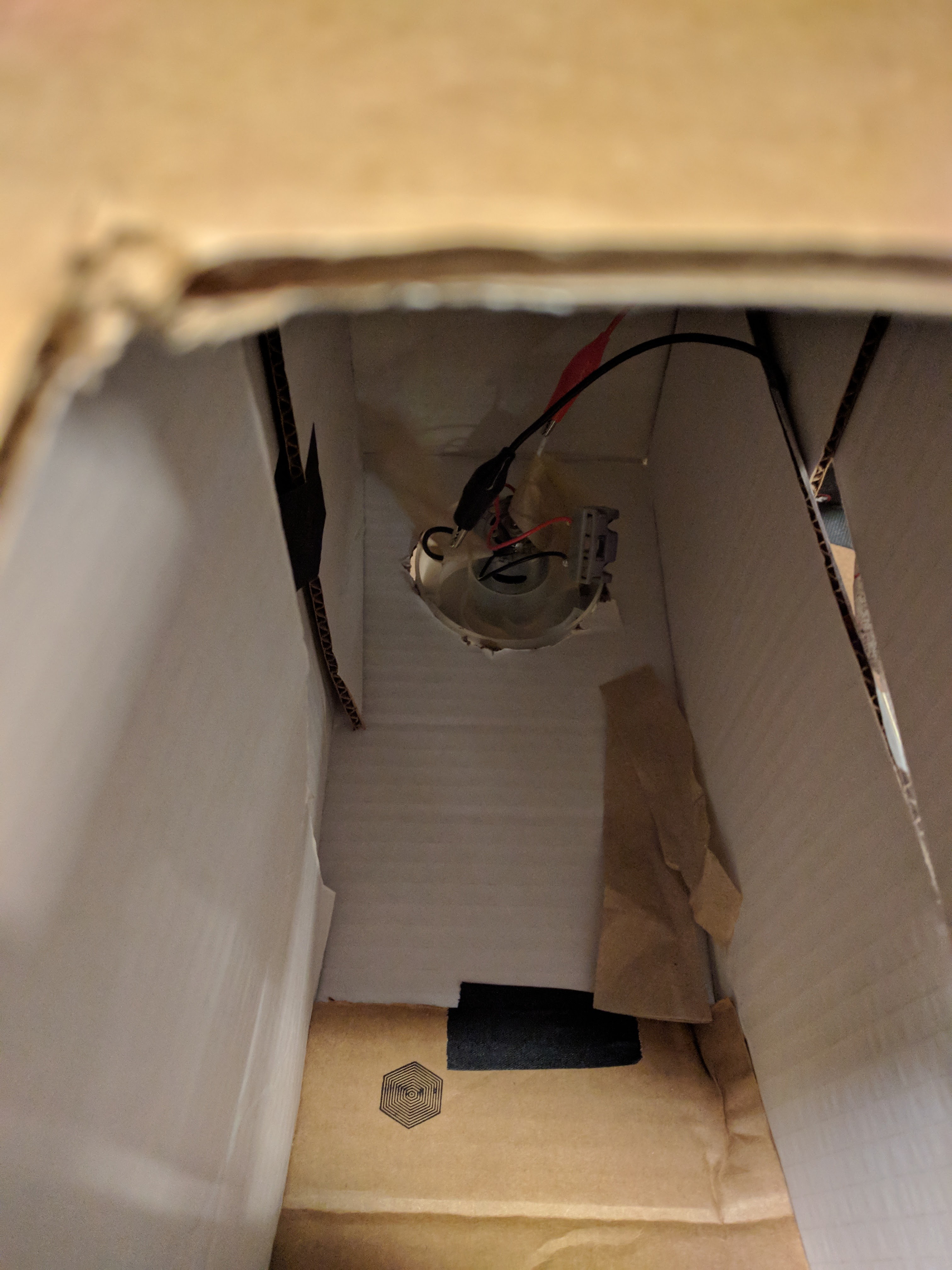 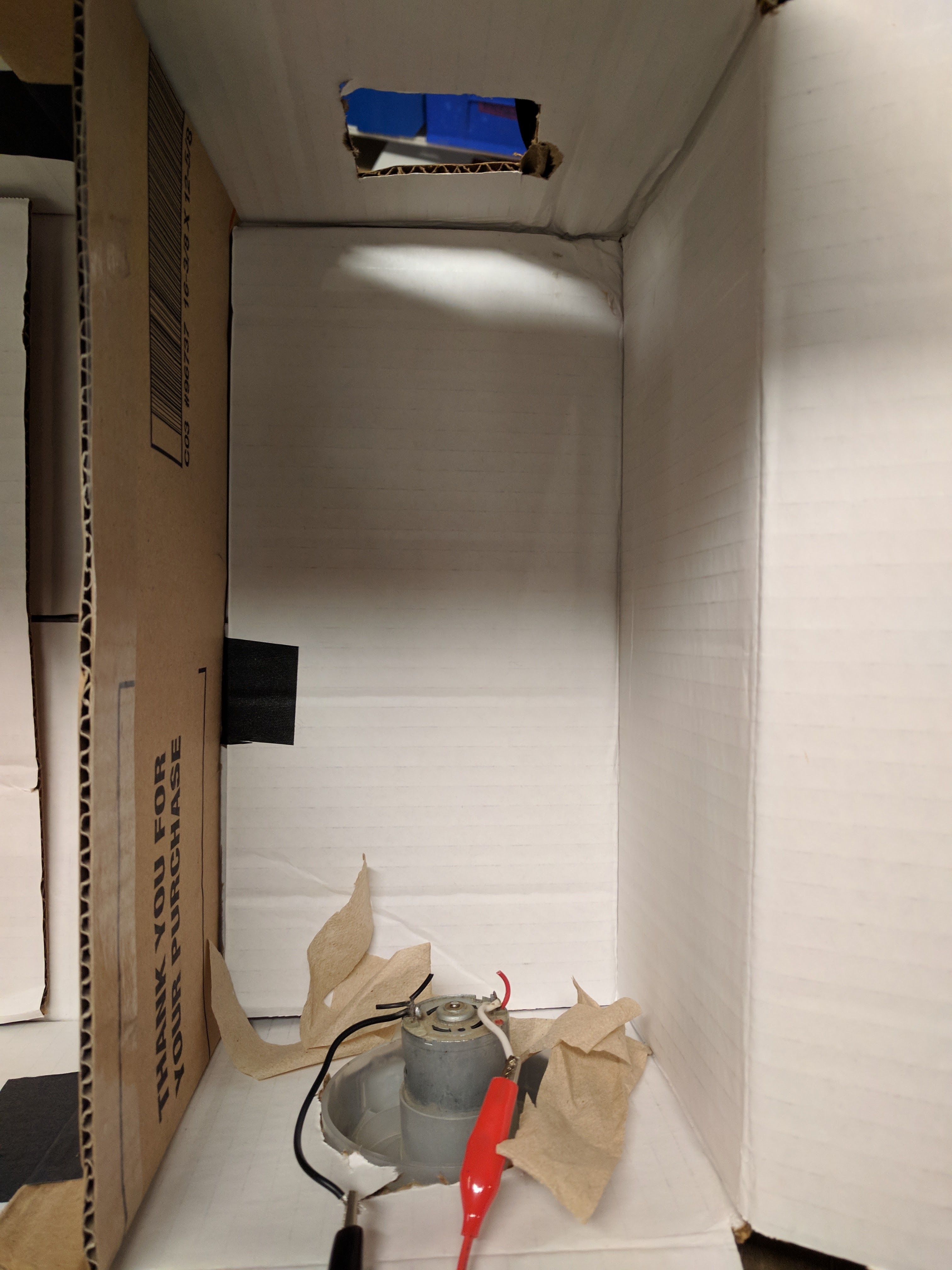 When testing with the smaller section, I found that a side vent worked better to circulate the air than a top vent.

Enclosure designs that I ended up differing from. I sketched out each piece that I planned to lasercut. 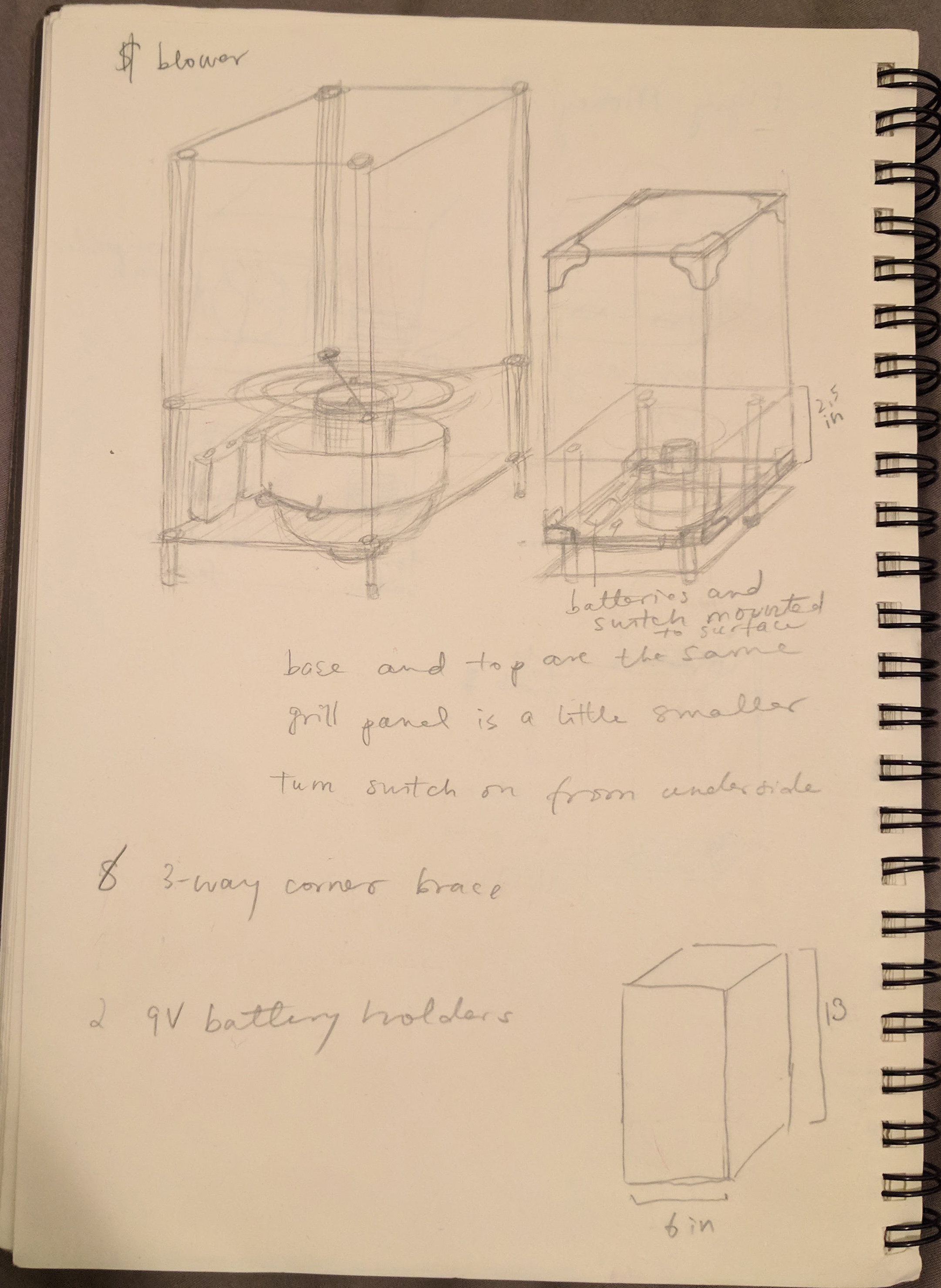 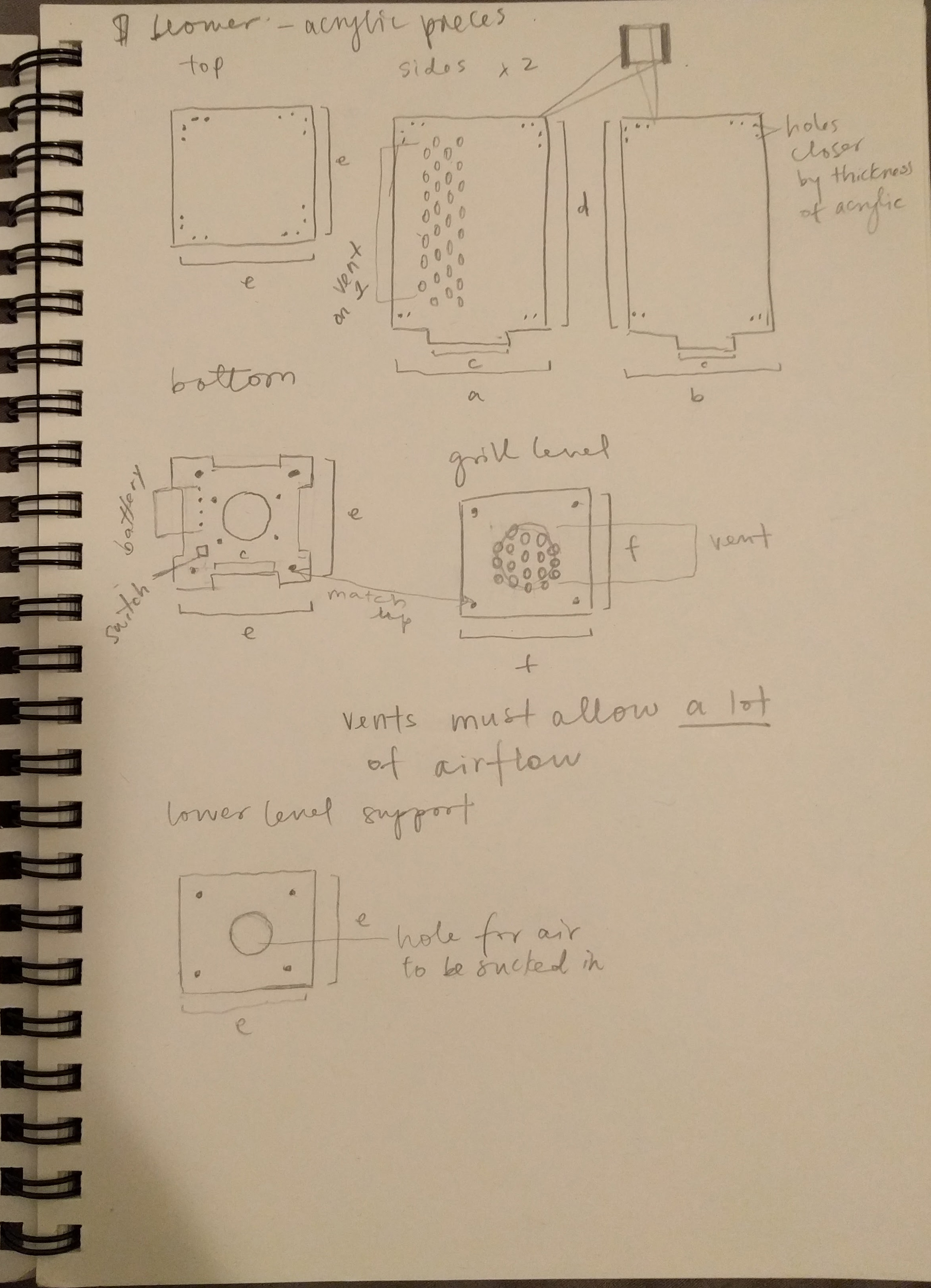 I originally planned to use metal brackets to connect the upper corners and sides. However, I messed up measuring for my lasercuts and all the holes on the right side of the panels did not measure up with the holes on the brackets. I then decided to just use acrylic solvent cement to glue the panels together in a box. This worked out really well and held together, although some angles are not exactly flush. 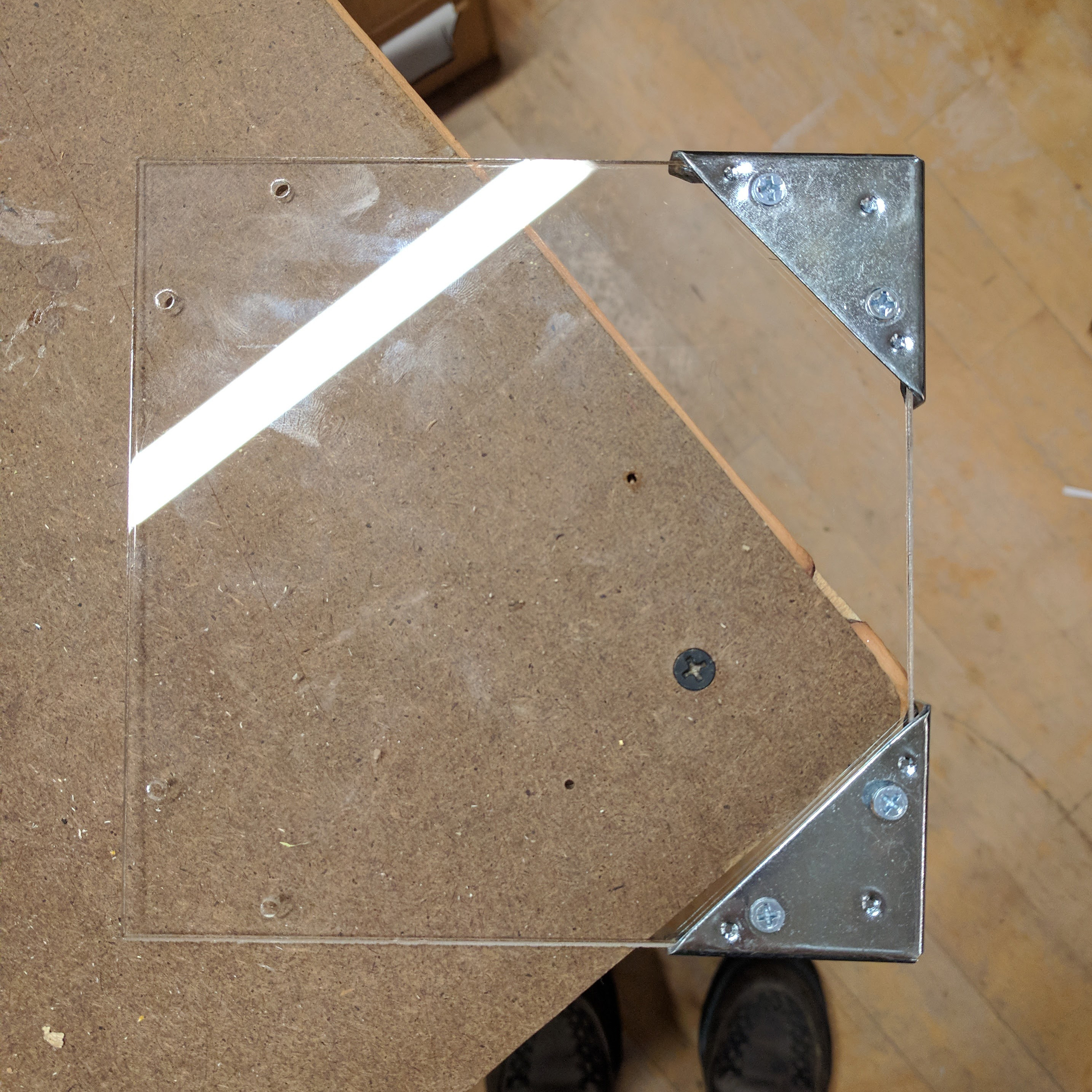 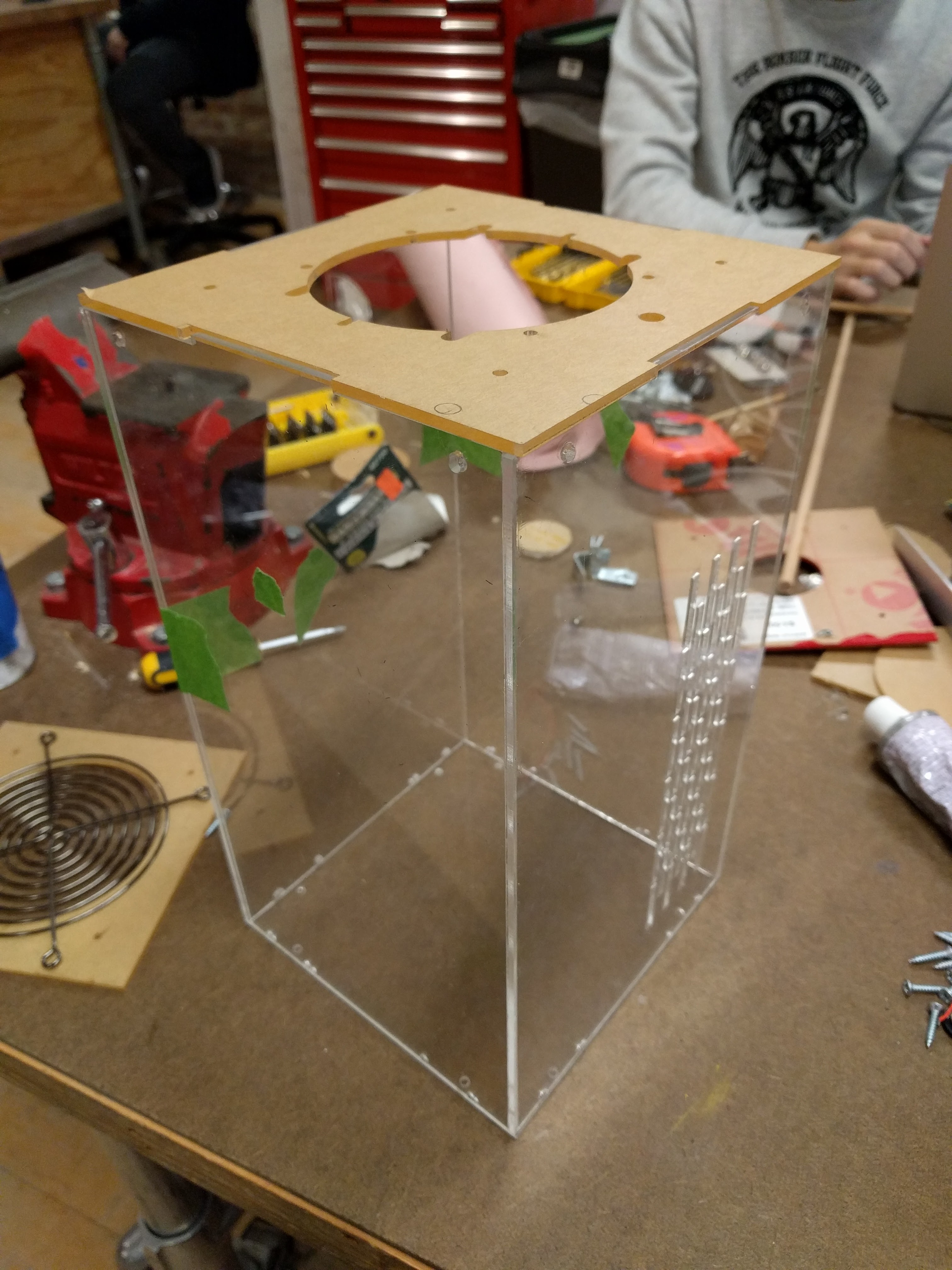 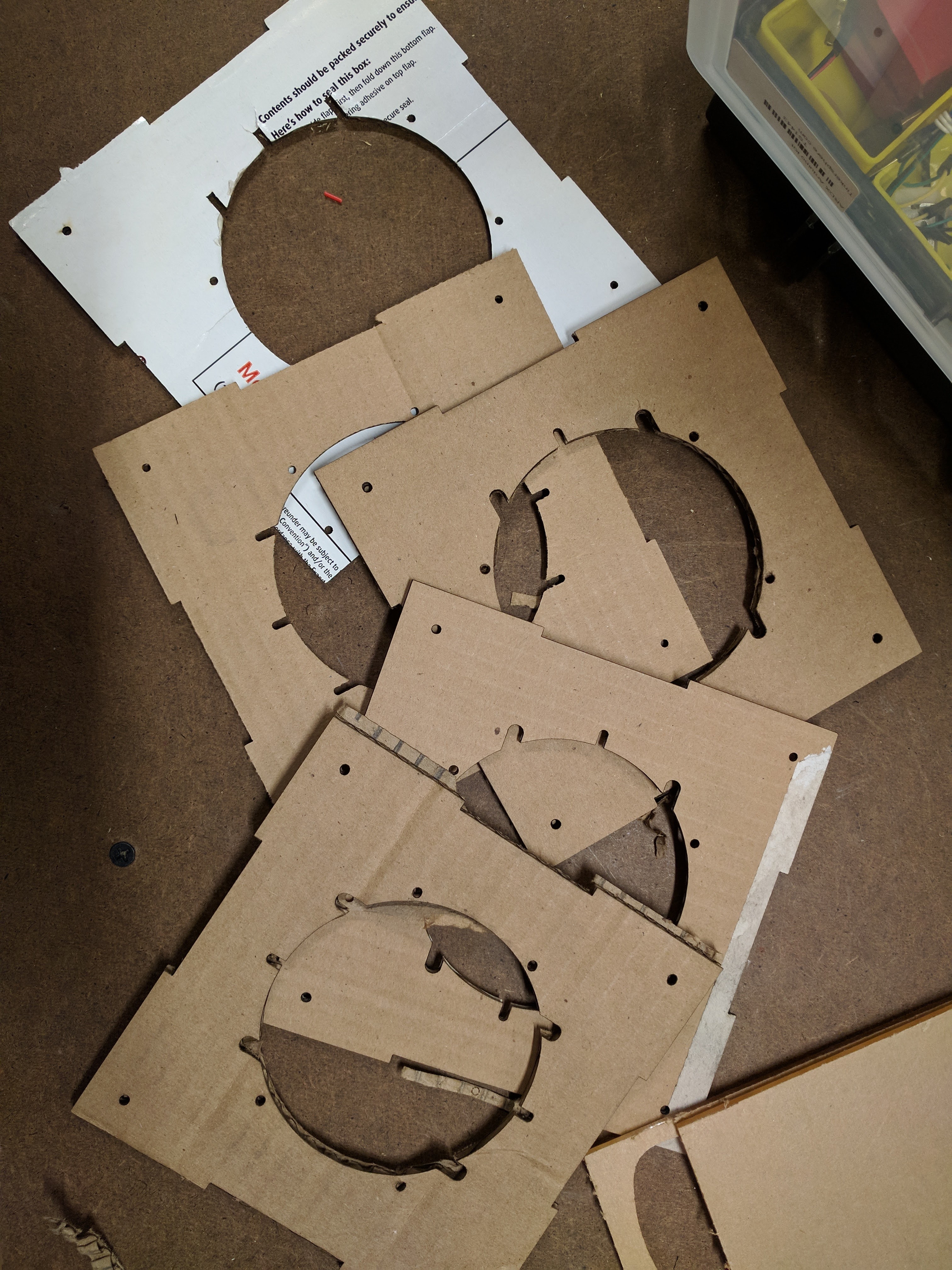 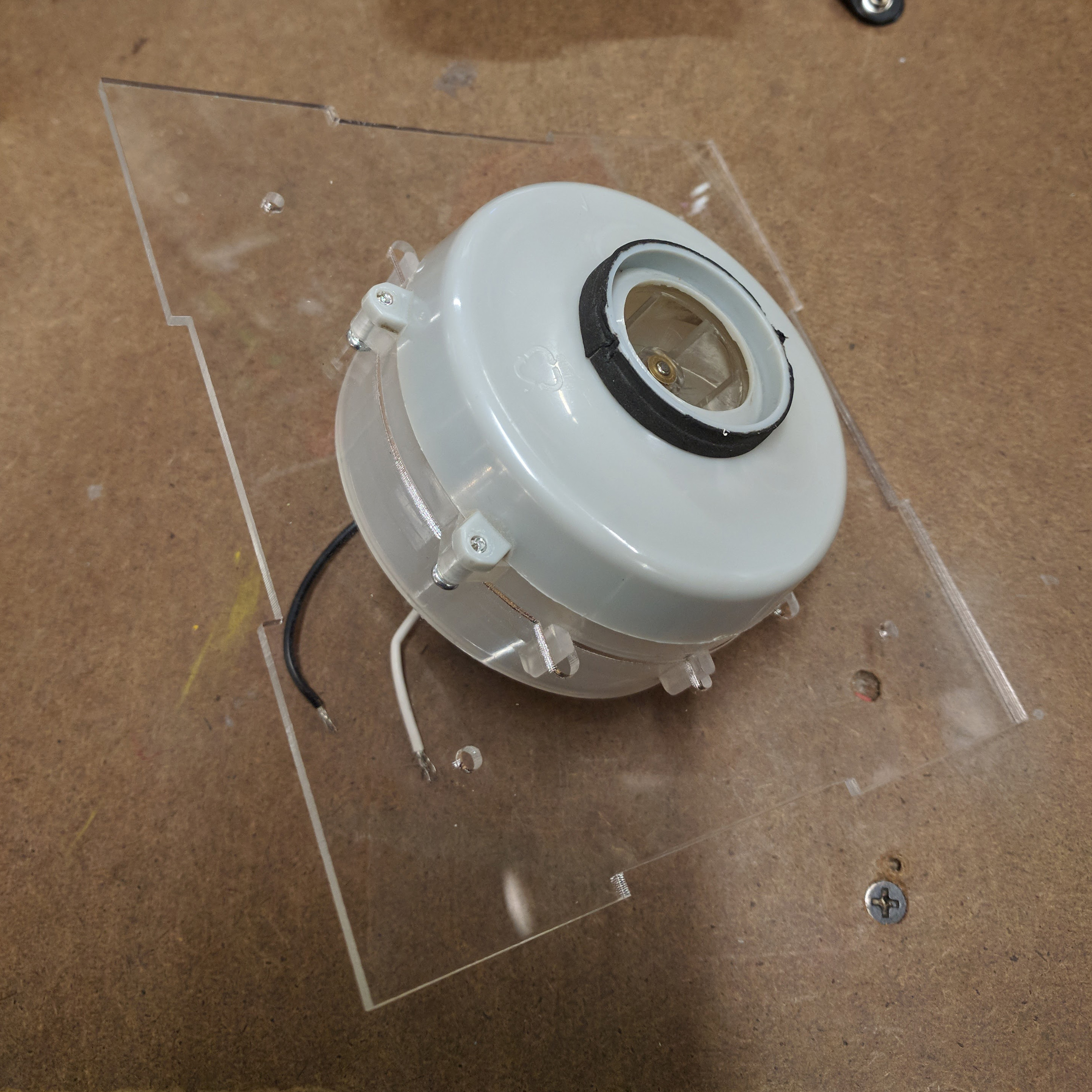 During my air flow tests, I saw that the paper often got stuck on the wires connected to the motor. That is why I designed a grill to sit on top of the motor which was mounted with standoffs. However, I didn’t end up using it because it caused even more airflow problems than the loose wires. Because of the distance between the fan and the grill, the grill layer caused a difference in air flow on either side of the layer, making the paper get sucked onto the grill. The paper flies up in a circular motion without the grill layer. I removed the metal and lowered the plastic layer to the level of the plastic fan edge. 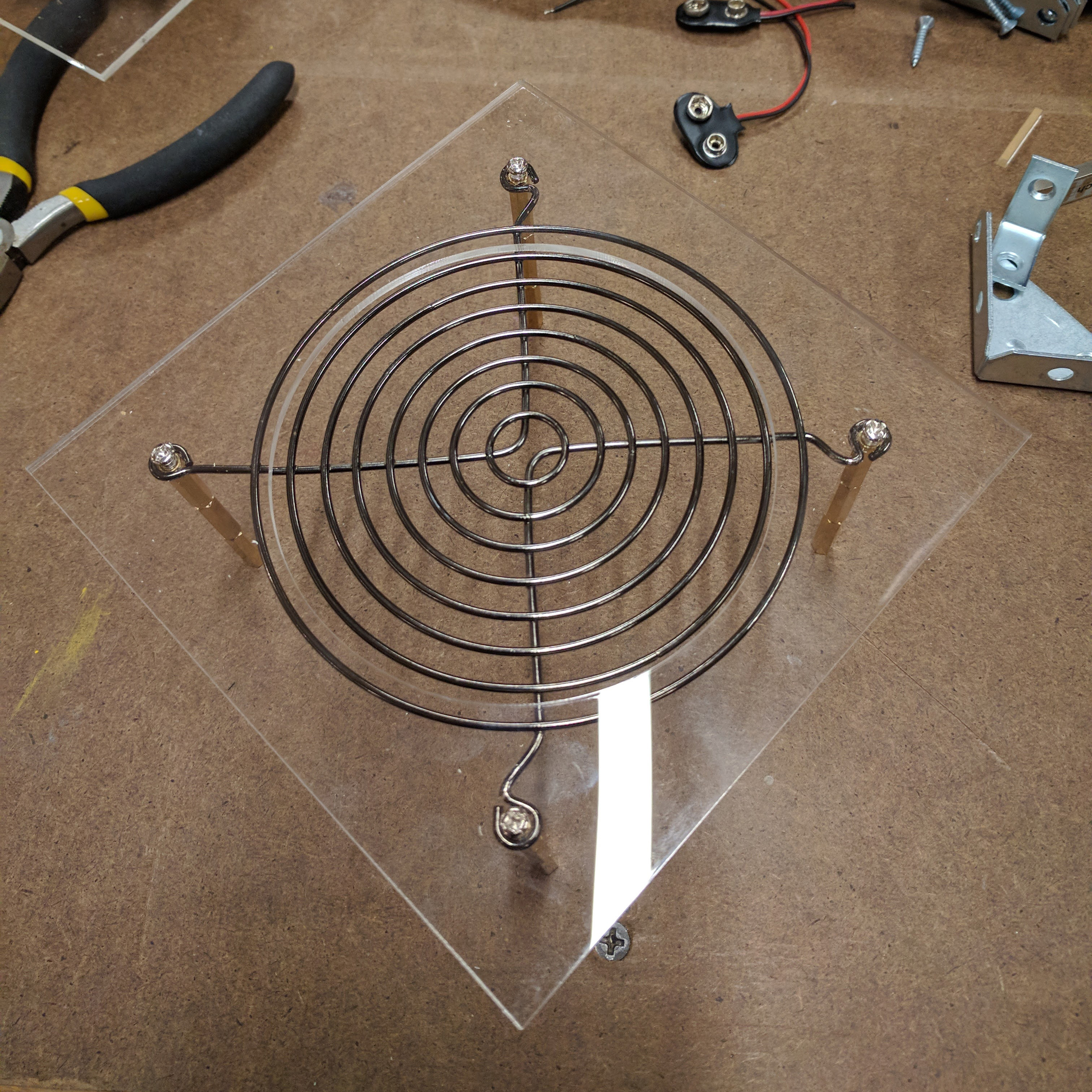 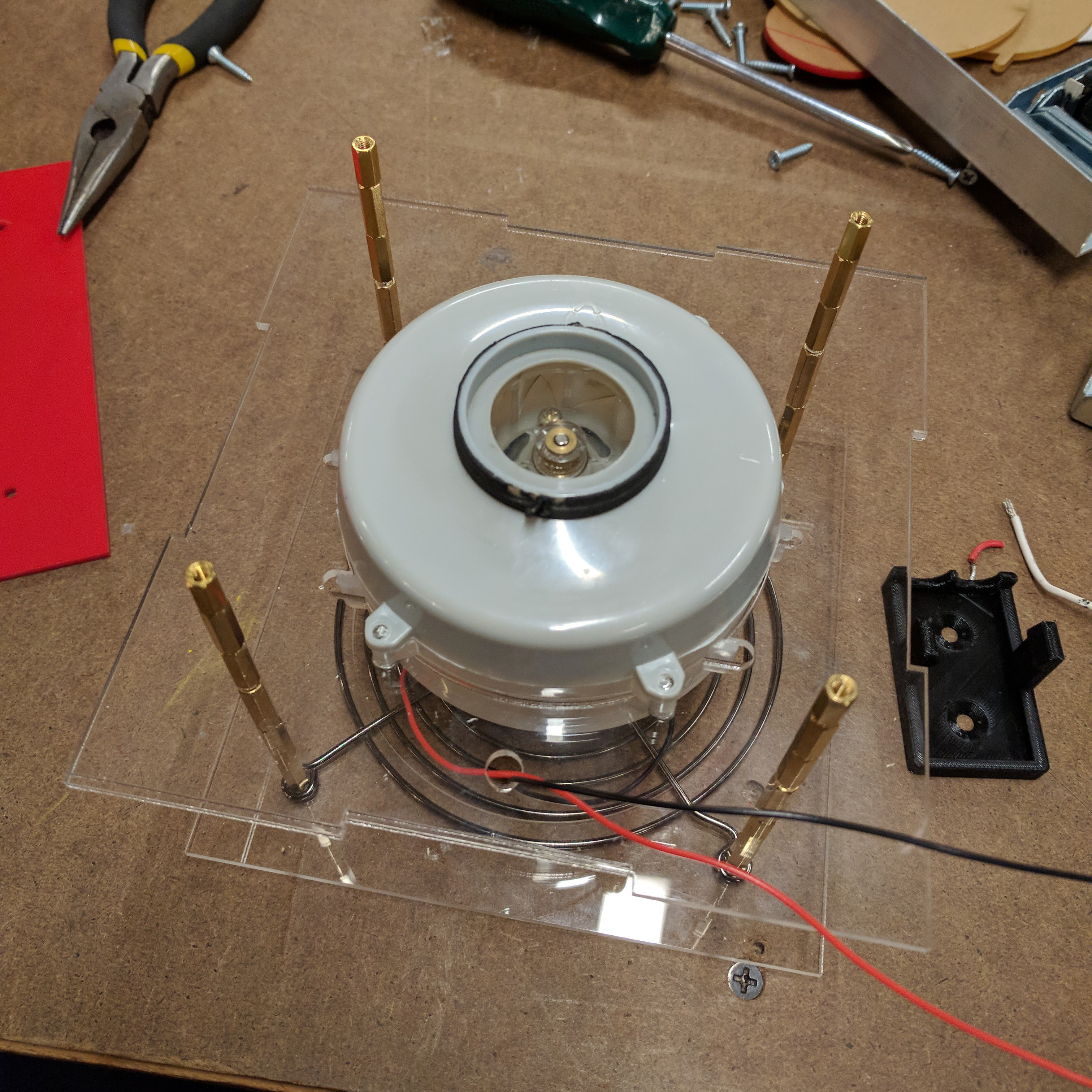 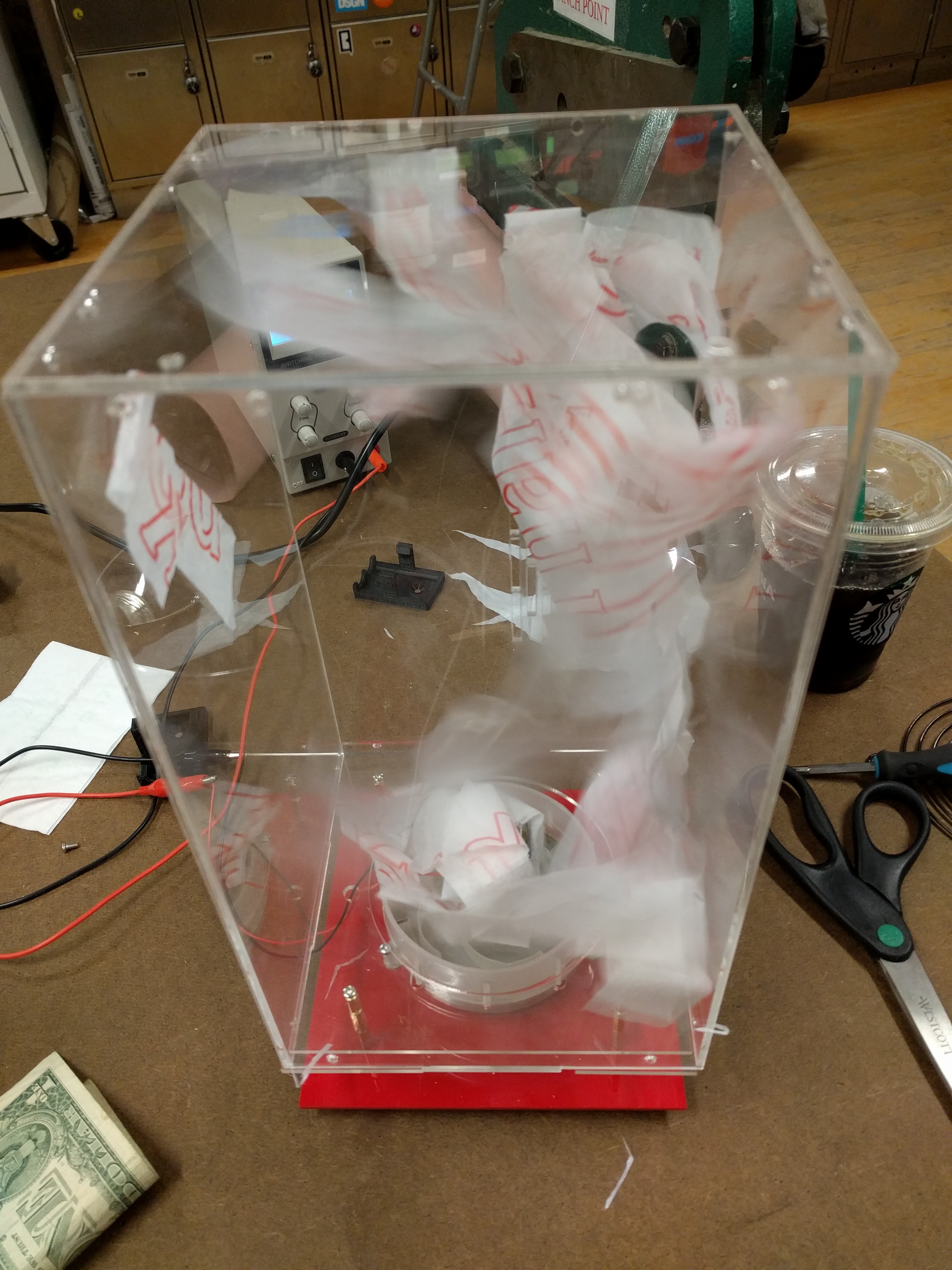 I found that the vent on the side panel was too large, making the papers stick to it. I ended up using cut up strips of trash bags and napkins. I kind of like how when the trash bag gets stuck to the side vent, you can read what’s printed on it.

Currently, I am using a variable power supply to power the piece at 18V. Originally I planned to mount 2 9v batteries in series on the red acrylic layer. However, I realized there is no point to using batteries since the device is not portable anyway. I could mount a power supply jack to the red layer, soldering it to the loose red and black wires, and buy a 18V adapter that plugs into the wall. 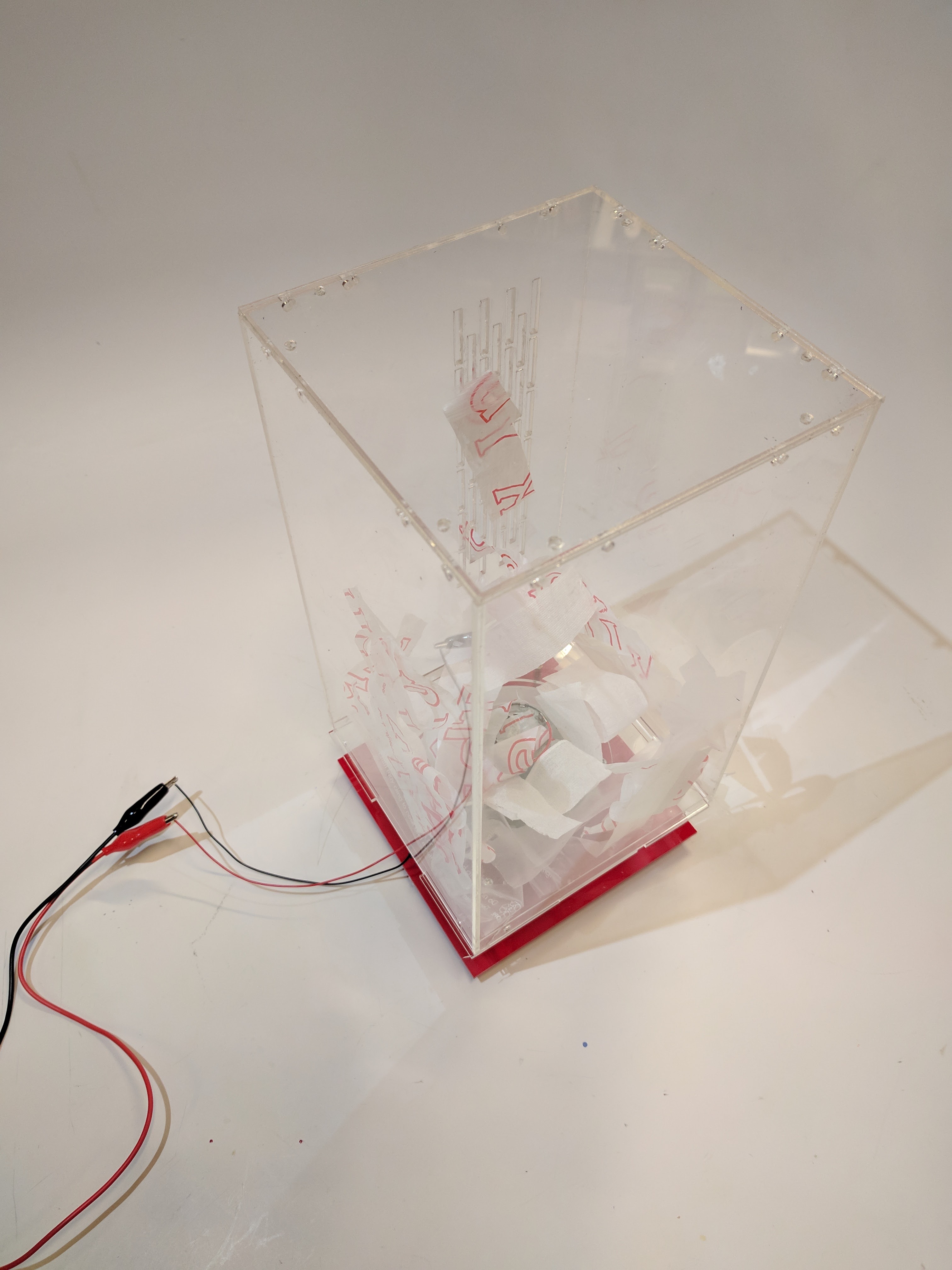